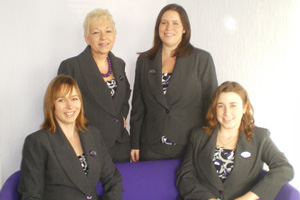 In September last year, Debby Green, Annette Whiting and Sam Grayson were made redundant when their branch of Stephen Walker Travel in Boston, Lincolnshire, was closed down.

However, rather than giving up, they joined forces with their friend Jenny Robson to set up a new agency, Departure Lounge Travel, in the same town and are already winning awards.

Robson, who has more than 30 years’ experience in travel, said: “Five years ago I had cancer and had been working part-time. I was bored and quite fed up, and when the others were suddenly made redundant they said we should give it a go ourselves.”

Robson borrowed £100,000 from her husband, and they began working on their new business in October 2009 before finally being awarded their coveted Abta number on in December last year.

“We had to find new premises, decide what to call ourselves, the colour scheme of the shop and everything,” Robson said.

“We had a few problems getting the funds for our Abta bond, as in these difficult times banks are very reluctant to lend money.”

Even a disastrous opening in January was turned into a positive. “The mayor was going to attend the opening but we had to cancel because of all the snow,” she said.

“However, because of the problems, Radio Lincolnshire heard about us and they now invite us to do a travel interview every month. It doesn’t cost us a penny and it’s amazing the number of people who listen.”

Nearly a year later, the agency has already won an award from Gold Medal for being its most supportive shop, while Debby and Sam have won fam trip places with the operator thanks to the amount of business they have generated.

The team is also hitting its first year targets, and while this year’s profits may disappear as they cover start-up costs, Robson is confident the shop’s second year will see the business close firmly in the black.