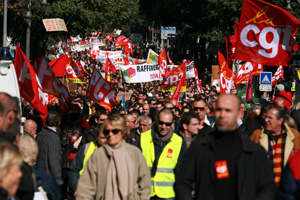 Travellers to France during school half-term this week face severe disruption as the country braces itself for further strikes.

Protestors against state plans to raise the retirement age from 60 to 62 are expected to take to the streets again this week.

French university students plan marches tomorrow (Tuesday) and trade unions are calling for a ninth one-day nationwide strike on Thursday and another on November 6.

While rail travel has returned to almost normal, with four our of five TGV express trains running today, several fuel depots remain blocked by strikers despite the presence of large numbers of riot police.

Strikes continue in the public sector in the southern cities of Toulouse and Marseille, with bus services and rubbish removal hit in particular.