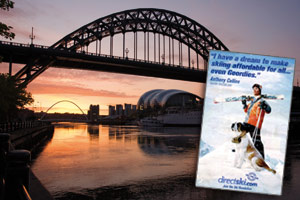 A ski operator has sought to defend an advert suggesting that people in the North East cannot afford to go skiing.

Directski came under the media spotlight yesterday after the adverts started appearing in the South saying: “I have a dream to make skiing affordable for all…even Geordies.”

The Dublin-based operator’s marketing manager Neal Collins apologised if anyone had found the advert offensive.

He said it was a genuine attempt to get more people interested in skiing.

He told the Mail on Sunday: “All the research shows that people ski less in the North-East than they do anywhere else and it’s fair to assume that is down to the average financial status in the north of England.

“We are not poking fun at the economic situation in the region. We are an Irish company – and Ireland isn’t in a strong position financially.”