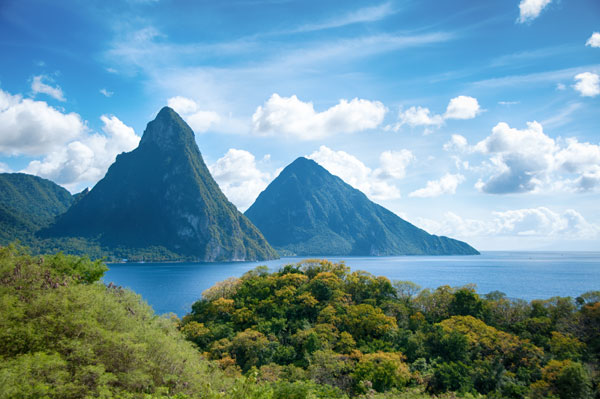 Majesty Reigns bobs lazily in the water as I gaze out over Saint Lucia’s national landmark. The Pitons stand tall against a baby-blue sky hung with white, woolly clouds – the largest, Gros Piton, rounded and tree-cloaked; the other, Petit Piton, jagged and spiked like a chunk of Toblerone, its crest circled by frigatebirds.

There are many ways to see the island’s treasured Unesco World Heritage Site. The only way to see it from this perspective, though – its two spires standing side by side in a sort of power stance – is from the water, which is how I find myself sipping rum punch on a sleek catamaran with a suitably regal name. 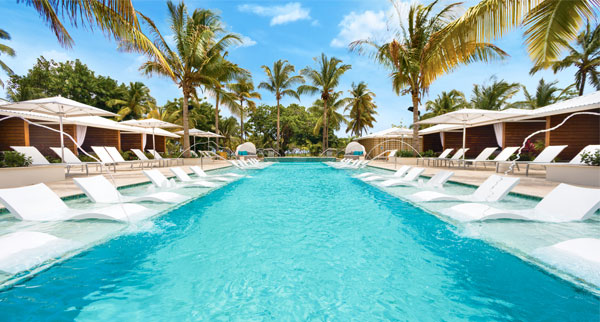 Such excursions are organised by one’s butler when staying at Serenity at Coconut Bay. The hotel, three minutes from Hewanorra airport along the southeast coast in Vieux Fort, is one of the newest additions to the island’s luxury product, having opened two years ago as the high-end, adult-only arm to 250-room Coconut Bay.

Everything about the property exudes luxury. From large, enclosed courtyards furnished with private plunge pools and hammocks shaded by swaying palms to four-poster mahogany beds, stone-clad rainfall showers and the scent of fresh mint in the air, each of Serenity’s 36 suites feels both exclusive and indulgent. 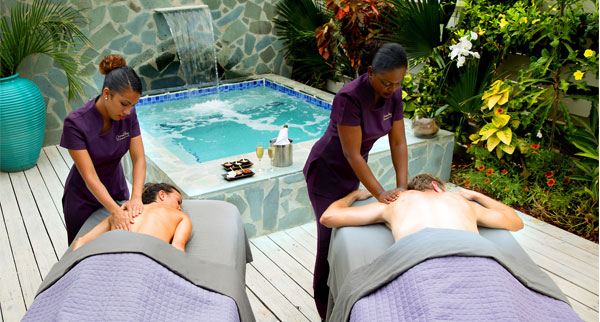 But it’s Serenity’s butler service that places this hotel among the island’s best. Butlers – just a phone call away – can run bubble baths infused with sweet-scented petals, organise in-suite spa treatments, lay on romantic poolside dinners in candlelit cabanas and ferry clients to their own private hideaway on the beach complete with picnic and prosecco.

“Donning bright yellow flippers and a matching snorkel mask, we spend the best part of 45 minutes with our heads submerged.”

Feeling the sun on my face on our catamaran tour, I realise they’re masters of excursions too. As well as snapping the ‘money shot’ of the Pitons, we sail between the peaks to Jalousie Plantation Beach, a sun-drenched cove with clear, turquoise sea so warm it feels like bathwater. Donning bright yellow flippers and a matching snorkel mask, we spend the best part of 45 minutes with our heads submerged, gawking at luminous blue parrotfish and schools of yellowtail snapper; zebra-striped butterflyfish and damselfish with Instagram-worthy iridescent scales; and the unearthly shapes of fire and brain coral. “It’s paradise under there,” breathes our guide, Janoi, when we finally come up for air, the two Pitons rising majestically around us. Paradise, indeed. 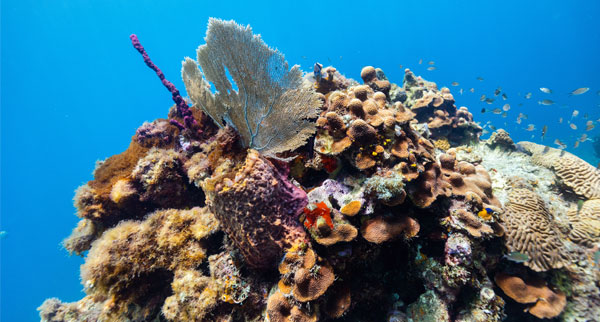 Unsurprisingly, such spots are dominated by luxury hotels. Sugar Beach, A Viceroy Resort – the former 18th‑century sugar plantation where Matt Damon and his wife renewed their wedding vows in 2013 and Gwyneth Paltrow celebrated New Year’s Eve – lines the sand and hillside above. Around the corner lie Anse Chastanet and Jade Mountain, the latter said to be the most expensive resort on the island with its iconic three-wall design and infinity pools in the majority of suites.

The luxury market is clearly thriving. Liz Fay, head of PR for Saint Lucia Tourism Authority, says she has seen a rise in premium product in recent years, bringing the island to 14 luxury hotels and 1,161 rooms – around a quarter of its total stock. “Many of our hotel partners have invested millions in upgrading and updating their product,” she adds.

“You can climb the Pitons, visit the world’s only drive-in volcano and sulphur springs, and swim in the rainforest-framed Toraille Waterfall.”

In light of such investment, operators were disappointed by Virgin Atlantic’s decision to drop its three-times-a-week service from Gatwick to Saint Lucia from next June after 21 years on the route. Some hotels, like Serenity, expect to feel an initial pinch. However, they have been buoyed by British Airways’ decision to partly fill the void by increasing its direct service to the island from seven to nine flights a week in July and August next summer, while Tui will continue to fly to the island weekly. 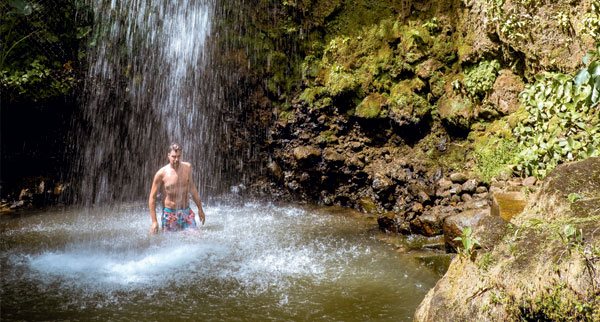 And there’s every reason to visit. As I wind through jungly hillsides dotted with stilted houses painted pastel pink, mint green and mustard yellow, and plantations full of trees laden with coconuts, bananas and guavas, I realise there’s a whole lot more to this island than its sugar-sand beaches (though you’ll get those in spades too).

“You can holiday like a Hollywood star; I’m told that Serenity’s recent guests have included Prince Charles and Hailey Bieber.”

Its mountainous, volcanic heart is natural entertainment at its best – you can climb the Pitons, visit the world’s only drive-in volcano and sulphur springs, and swim in the rainforest-framed Toraille Waterfall. The island’s warm hospitality is infectious. Saint Lucia is a place where rain is called ‘liquid sunshine’; where locals beep their horns at fellow drivers to say ‘hello’ rather than ‘move’. And, best of all, you can holiday like a Hollywood star. I’m told that Serenity’s recent guests have included Prince Charles and Hailey Bieber. All things considered, I can’t say I’m surprised.

Love is in the air

Saint Lucia is a natural magnet for romance, and Serenity at Coconut Bay plays right into its hands. The property’s new Sapphire wedding package allows guests to get married on board Majesty Reigns, with the iconic Pitons for witnesses, while other packages cater for engagements, honeymoons and anniversaries. Neighbouring resort Coconut Bay provides two wedding venues, including a private beach and ocean-view pavilion, with guests granted full use of its nine restaurants, seven bars, five pools and fitness and spa facilities.

Seven nights’ all-inclusive in a Plunge Pool Butler Suite at Serenity at Coconut Bay start at £2,101, based on two sharing. Flights not included.
serenityatcoconutbay.com