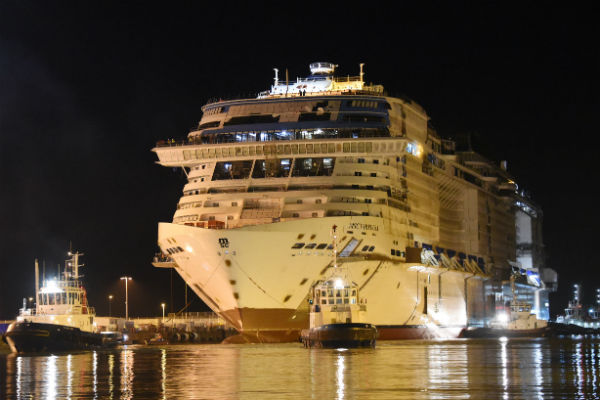 The latest in a series of new MSC Cruises ships has been floated out at its shipyard in France.

MSC Virtuosa is the second Meraviglia-Plus vessel following MSC Grandiosa and will now move docks at the Chantiers de l’Atlantique shipyard in Saint Nazaire for further construction and fitting until delivery in October 2020.

The float out follows the delivery in October of MSC Grandiosa as well as the steel cutting ceremony on the same day of MSC Europa.

MSC Virtuosa will be the second ship in the company’s fleet to have a selective catalytic reduction system and next-generation advanced wastewater treatment system to minimise the environmental footprint and ensure cleaner air emissions.

The catalytic reduction technology aims to help reduce nitrogen oxide by 80% by converting it into harmless nitrogen and water.

MSC Virtuosa will also be fitted with shore-to-ship power which connects it to a port’s local power grid to further reduce air emissions.

The line will soon reveal exact details of the features on board MSC Virtuosa.

But like MSC Grandiosa, the ship will have a promenade lined with restaurants and shops underneath a 93 metre-long LED Sky Screen, two new shows from Cirque du Soleil at Sea and the Zoe personal cruise assistant in every cabin.

The ship’s maiden voyage will be a seven-night six-port western Mediterranean cruise in November 2020 from Genoa, Italy.

After a winter season in the Mediterranean, MSC Virtuosa will be deployed in summer 2021 to Northern Europe with itineraries to the Norwegian fjords and Baltic capital cities.

The third of three Meraviglia-Plus ships, yet to be named, will enter service in 2023 and be powered by liquefied natural gas (LNG).