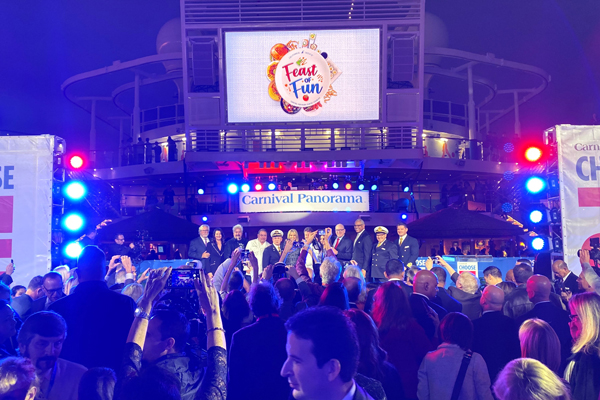 Carnival Cruise Line has officially named Carnival Panorama in Long Beach, California, where the 4,008-passenger ship will be based.

No cruise line has deployed a new ship on the US west coast for 25 years, Carnival Cruise Line president Christine Duffy told more than 2,000 guests at last night’s ceremony on board.

Carnival Corporation chairman Micky Arison, Arnold Donald, the corporation’s chief executive; and Princess Cruises’ president Jan Swartz were just some of the leading industry figures in attendance for the naming of the line’s final Vista-class ship.

Chefs Guy Fieri, Emeril Lagasse and Rudi Sodamin were all given a rousing reception by the crowd on the ship’s lido deck.

Duffy said: “This is the first new ship that will homeport here year-round for 25 years. We are very happy to homeport [Carnival Panorama] here in Long Beach alongside Carnival Inspiration and Carnival Imagination.”

Duffy said Heroes Tribute Bar on deck five was the feature which had “the most meaning”.

“At Carnival Cruise Line, we look to the godmother to personify the Carnival mission,” added Duffy, who introduced Carnival Panorama’s godmother Vanna White.

TV host White, who has starred in US game show Wheel of Fortune for 37 years, officially named the ship by pressing a button which smashed a bottle against the ship’s hull.

She said: “This naming of a brand-new ship is a once in a lifetime opportunity and one that I will never forget.

“Thank you, Carnival Cruise Line, for allowing me to serve as the ship’s godmother. I just know that the ship will provide endless fun for families for years to come.”