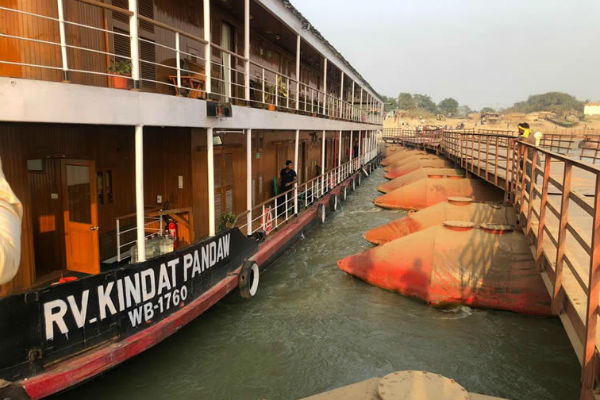 The boss of Pandaw has apologised after one of its river vessels struck a pontoon on the Ganges river in India.

Paul Strachan revealed that the Upper Ganges itinerary is being revised to avoid a section with pontoon bridges. Passengers will be transferred overland for the final leg between Ghazipur and Varanasi.

The Kindat Pandaw vessel was holed above the waterline in the accident.

Strachen, writing in a blog on the Pandaw website, said: “Last week we received some very negative press coverage from a journalist travelling as our guest on the Kindat Pandaw on the Upper Ganges and in the UK an article appeared in the Sunday Times over a collision with a bridge.

“Following our investigation, which has included interviews with the master and other key crew members, we have established that that the ship accidentally bumped into a pontoon or floating bridge that was about to be opened to allow passage through.

“The hull was holed above the waterline with a gash of about 20cm and a very small amount of water entered the sealed hull compartment. Bilge pumps were immediately activated.

“These ships are designed to cope with water ingress and have water-tight bulkheads and bilge pumps.

“Collisions on busy waterways do occasionally happen, usually with other vessels, and crew can temporarily patch any hole in a moment using patch kits we carry on our ships.”

He added: “In this case the tour guide, who is a freelancer, panicked and ordered the evacuation of the ship. This should have been the master’s decision not the guide’s.

“It could be argued that this was a correct precautionary measure, but it was a complete overreaction. It caused considerable distress for the passengers. For this we can only apologise.

“What was a relatively minor incident quickly became a drama. We are really sorry that the passengers had this experience.”

Strachan said: “Learning from this experience, we are working with our Indian partners on improving crew training to ensure such a panic does not happen again and that there is a clear chain of command.

“Working with the IWAI (Inland Waterway of India) we are making good progress on improving navigational aids and channel markings. IWAI have been incredibly helpful supplying us with expert pilots and pilot boats.

“We at Pandaw pride ourselves on our safety record and the professionalism of our crews. A common comment on passenger feedback is the excellent seamanship of our river masters.

“Other than one minor incident eighteen years ago in Vietnam (when we hit a fish farm), we have never made an insurance claim, nor have we ever been sued by anyone, and only once ever evacuated a ship as a precaution when we had a cyclone warning on the Chindwin, and that was many years ago.”