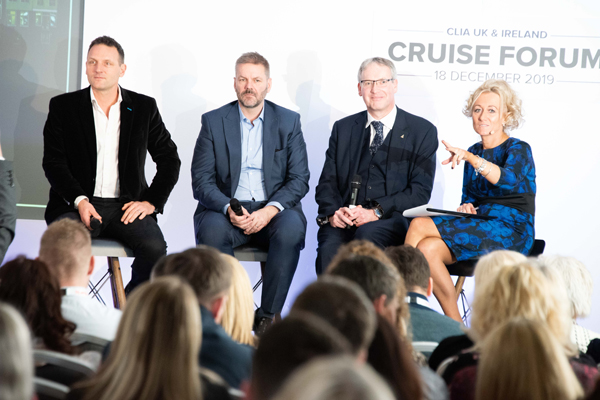 A leading sustainability expert has appealed to the cruise industry to champion the efforts it is making to reduce carbon emissions.

On the day the global shipping industry proposed a $5 billion research fund to meet UN targets on cutting emissions, a three-man panel at the Clia Winter Forum admitted no carbon offsetting schemes were currently being widely used by the cruise sector.

Jefferson, who has never taken a cruise before, said: “Some of these really exciting innovations are not getting out there.

“Use the forums that you have right now to start a conversation. Let’s remain positive on this. It is challenge. People see media stories that look and sound quite shocking.

As many as 32m cruise passengers projected in 2020

“We have got to get out to these people and say ‘yes, there is an issue and we’re tackling it’.”

Jefferson, who has 23 years’ experience in solving operational challenges in the aviation industry, said British Airways and Virgin Atlantic were looking into converting landfill waste and emissions from industrial processing into jet fuel.

He said the airlines’ schemes could help reduce carbon emissions by 70%.

“Even if customers are not yet asking for it, it will be a big thing,” he said. “We should be on the front foot, saying ‘Did you know that cruise lines are doing this?’

However, just five agents in the room had downloaded the guide from Clia’s website.

Asked about whether a particular carbon offset scheme was being widely used by cruise lines, Hawke said: “No. One of the challenges is knowing which are the good carbon offsetting schemes. There are so many out there. I think it has been proven that carbon offsetting is not the answer.”

“There are many things happening across our industry,” he said. “The trick for me is having that distilled into a clear and simple message.”