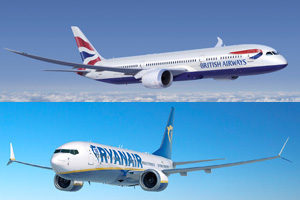 Jet2 and Virgin Atlantic have been described as better quality than British Airways in a survey by consumer champion Which? Travel.

Ryanair was rated bottom in the short-haul category with a customer score of 44%, just below BA at 55% and Spanish low cost partner Vueling with 54%.

Jet2 came second only to Channel Islands minnow Aurigny Air Services at the top of the short-haul table with a customer score of 79% – up from 75% last year.

BA was ranked the best short-haul airline in the Which? Travel survey in 2015 but IT failures, strikes and mass cancellations have continued to see the airline descend in customers’ estimations.

When passengers were asked to describe their experiences of customer service, boarding and cabin environment, BA performed poorly for the quality of food and drink, seat comfort and value for money for both its short- and long-haul services, according to the Which? survey published today (Thursday).

Many passengers who had flown with Ryanair pointed out the “endless add-ons” and “finicky” luggage requirements.

Customers gave the no-frills airline the lowest possible score of one star out of a possible five in all categories including boarding, customer service and cabin experience, apart from value for money where it managed a two-star rating.

EasyJet found itself with a respectable 65% and in the middle of the short-haul table, including four stars for value for money.

Short-haul travellers continued to praise the efforts of Jet2 for its budget prices and premium service, earning five stars for customer service.

Some said it was their favourite airline and one passenger said Jet2 does not feel like a low-cost airline.

Virgin Atlantic (72%) has kept standards high while seeing off budget upstarts like Wow Air and Primera – both now bust.

Those surveyed also described Virgin Atlantic was the best option when flying to the US.

While the boarding process and the cabin cleanliness of American Airlines managed three stars, everything else was rated by passengers as below average, one passenger summed this up by saying “the cabin was scruffy, the staff rude, the food awful”.

Which? Travel editor Rory Boland said: “Year after year the same culprits continue to sink to new lows yet for many of us there is a choice.

“You don’t have to keep booking with an airline that has let you down – or one that you loved for years but has slipped in quality.

“If you get a choice and you are flying short-haul, choose Jet2, it is better quality than BA and often has better fares than Ryanair.

“If you are heading to the States, Virgin Atlantic beats BA hands-down.”

But BA claimed the ranking is not accurate given the number of responses and number of flights.

A BA spokesperson said: “Our own data shows customer satisfaction scores have increased, and continue to increase, as we deliver our £6.5 billion investment for customers on new aircraft, new food, new lounges and new technology.”

An American Airlines spokesperson added: “American Airlines takes customer feedback very seriously, and we were disappointed to see the findings of the Which? survey, based on the experiences of 53 customers.

“We have invested more than $28 billion in our product and people since 2013, and we are growing in the UK market.

“However, we recognise there is always room for improvement and we will continue to strive to deliver an excellent service that cares for our customers on life’s journey.”