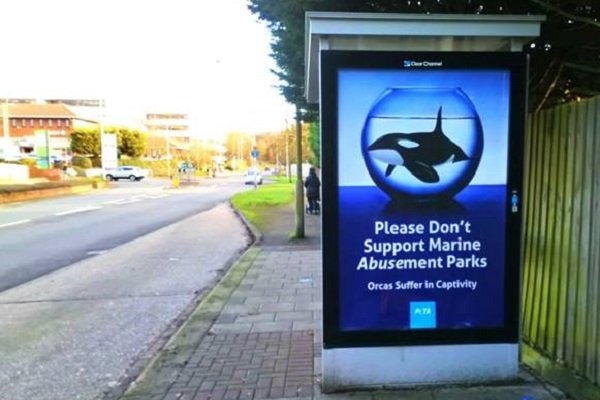 The organisation has taken out advertising space at bus stops near the Luton office in a bid to convince employee’s at the UK’s largest tour operator to change the company’s stance.

Peta is urging Tui to follow the lead of British Airways Holidays and Virgin Holidays – both of which have cut commercial ties with SeaWorld, the most well-known marine theme park.

Tui says it only works with excursion venues that meet Abta’s Global Welfare Guidance for Animals in Tourism standards.

SeaWorld has long argued that Peta’s demonstrations are “well-intentioned” but “misguided” and defends its work on conservation, rescue, research and education around marine life.

Comment: Criticism of SeaWorld is more philisophical than scientific

“While the majority of the travel industry is moving away from parks that confine far-ranging orcas to cramped concrete tanks, Tui is still propping them up,” said Peta director Elisa Allen. “Peta is urging Tui to do right by orcas in 2020 and stop selling tickets to SeaWorld’s watery prisons.”

Peta says that orcas in the wild form complex relationships, work cooperatively to find food, and swim up to 140 miles of ocean every day, and accuses SeaWorld of housing them in “incompatible groups” in “cramped tanks” and giving them diazepam to manage stress-induced aggressive behaviour.

A Tui spokesperson said: “We are aware of the Peta advertisement and we understand the debate surrounding SeaWorld.

“We completely reject Peta’s accusations as we are committed to working only with excursion venues that agree to uphold the ‘Global Welfare Guidance for Animals in Tourism’ as formulated by the Association of British Travel Agents (Abta).

“The venues we feature are subject to an extensive and independent animal welfare audit programme to ensure that they are upholding global animal welfare standards.”