Overview: Norwegian Encore is the fourth and final Breakaway-Plus class ship to launch. Like its sister ships, the 3,998-passenger vessel is jam-packed with cutting-edge and innovative features, which cater for everyone. The enhancements are generally subtle; the go-kart track has been expanded and virtual reality park Galaxy Pavilion makes a return after being overlooked by Norwegian Bliss’s design team.

Cabins: Accommodation is broken down in to 2,040 staterooms, which includes 82 studio staterooms and 80 The Haven suites – set on their own exclusive complex and offering 24-hour butler service, a concierge and private sundeck. Thirty are outside the actual complex, but still offer the same services. More than half the staterooms available are balcony cabins, featuring a double bed, sofa and sizeable bathroom.

“A la carte Italian restaurant Onda by Scarpetta on deck eight is new, with a menu featuring traditional and contemporary dishes.”

Food and Drink: There are 29 dining venues onboard – and you’ll be hard pressed to eat at, let alone find, each one during a cruise. A la carte Italian restaurant Onda by Scarpetta on deck eight is new, with a menu featuring traditional and contemporary dishes; veal chop Milanese and black cod are among the highlights. It’s no surprise the line has already announced that the restaurant, which made its name in some of the hottest city destinations across the world, is also being rolled out onto other ships in the fleet. NCL favourites – signature steakhouse Cagney’s, Japanese eatery Teppanyaki and Mexican restaurant Los Lobos – can also be found on board. 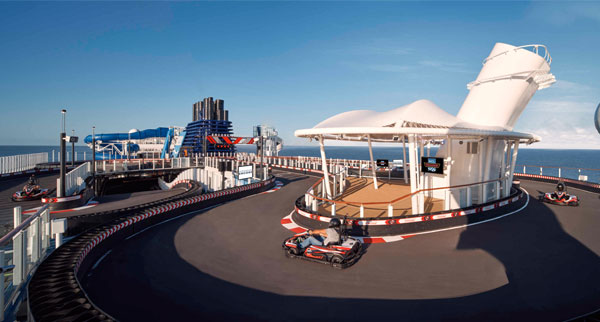 Facilities: Commentators were wowed when NCL put a go-kart track on Bliss. Encore not only has an expanded track – with a section that goes over the side of the ship – but also a laser tag arena, water park, spa and the Galaxy Pavilion, featuring virtual reality rides and arcade games across 10,000sq ft. Yet despite all this, you never feel as though overcrowding is a problem. There are plenty of areas for those wanting to get away from the action – including the Observation Lounge on deck 15 and The Haven Lounge on deck 17 (adult-only, and included for passengers in The Haven suites). The Mandara Spa can hold 120 passengers and costs $269 for unlimited access on a seven-day cruise.

USP: It is always staggering how NCL manages to fit so much on its Breakaway-Plus class ships without ruining the aesthetic or the atmosphere on board. The quality remains high, regardless of the activity you are doing or the restaurant you are eating in. This is the perfect vessel for a family as it has something for all age groups.

Book it: Norwegian Encore will offer seven-day cruises to the Eastern Caribbean until April 19. Prices for the seven-day Eastern Caribbean sailing, departing from Miami on February 23, start at £649. The ship will then reposition to New York City for a summer of Bermuda cruises through to November 22.
ncl.com

Cruising back to the 80s with an at-sea music festival
Tried and tested: We step on board Sky Princess
The best things to do in the Singapore before a cruise