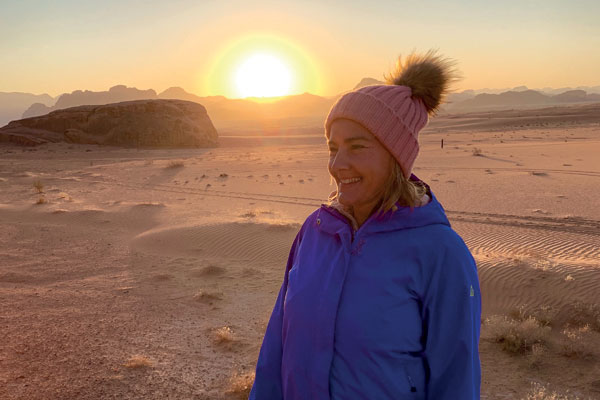 Travel Counsellor says her passion for travel led her to the industry. Benjamin Coren reports.

Q. When did you join Travel Counsellors?
A. I celebrated three years as a travel counsellor at the start of this year. Before I joined, I’d never worked in travel before, so I came through the group’s Travel Academy.

Q. What did you do before?
A. My first job was for Manchester United, in the membership and supporters’ club. At one point we had David Beckham stuffing envelopes in our office for £28 a week, which was the standard YTS (Youth Training Scheme) pay, and way less than what I was paid. This was when he played in the youth team – if only I knew then what I know now, I would have been a bit more friendly towards him.

Q. Any travel experience?
A. I went travelling, then got a job working for Co-op in the head office doing market research, mainly for Funeralcare, but I did do some travel research. I was there for 14 years before I was made redundant.

“I’d always had a passion for travel, and wish I’d gone into it when I left school, but I never knew back then what I wanted to do.”

Q. How did you find out about Travel Counsellors?
A. After being made redundant I wanted to go to Israel on my own. I decided to go to a travel agent and booked it with my local travel counsellor. I saw what she was doing and thought ‘that’s the job for me’. I’d always had a passion for travel, and wish I’d gone into it when I left school, but I never knew back then what I wanted to do.

Q. Was travel a big change?
A. For me, the challenge was learning the nuances of travel and making bookings and learning about new destinations that I wasn’t familiar with. It was a steep learning curve in terms of which suppliers to use and the selling aspect. But I was already experienced in things like marketing, which helped.

Q. How do you promote yourself?
A. I’ve been on local radio to talk about all sorts of travel topics, mainly on a local station called Trafford Sound. I often promote myself on Facebook when I’m on the radio and it’s great for followers to see and it promotes me as a travel expert. I talk about destinations to go to and offer travel and packing tips. I was also on Salford City Radio after Thomas Cook collapsed to talk about how to book holidays safely.

Q. You’ve also appeared in adverts for Exodus Travels. How did that come about?
A. They were looking for people of the right age bracket who wanted to take part in the filming for an upcoming advert. It was sent out at very short notice, but I was available, so said I’d do it. We had to send a photo, and after going through them all they had to pick four people. Exodus Travels took us to Jordan for four nights and we spent the whole time in the Wadi Rum desert where we stayed at the Exodus Private Camp, a traditional Bedouin camp. For the shoot, we spent a lot of time waiting until the light was right for shooting, and the crew had to keep polishing their camera lenses to remove the sand.

“Exodus Travels took us to Jordan for four nights and we spent the whole time in the Wadi Rum desert where we stayed at the Exodus Private Camp.”

Q. How was the shoot?
A. It was quite brief and we did lots of set-up shots in the camp. They also had a camera drone which filmed us on the back of a 4×4 truck travelling across the sand. We had a campfire on the sand and drank tea – that was the bit they used in the advert. For the length of the advert, they did a lot of filming to get those shots, and they also took a lot of stills that you can see on the Exodus website.

Q. What do you enjoy most about selling travel?
A. Every enquiry is completely different. I love it when someone requests something complex that I can sink my teeth into. I’ve had lots of opportunities to travel myself, which allows me to indulge my passion for travel and help people do the same. I love to add value to people’s trips and it’s a brilliant feeling when they come back and say they have had an amazing time.

I’m getting ready to climb Everest for Reuben’s Retreat

An opportunity to climb to Everest Base Camp to raise money for Reuben’s Retreat was unveiled at the Travel Counsellors conference in November. I thought it would be an amazing thing to be part of but, as it would mean being away from home for two weeks, I didn’t think I could do it. But when they put messages out saying the trip was filling up, I thought ‘I have to do it’.

I have a lot of fundraising to do – I need to raise £2,300 by March 2021 – but I have a year to do it. I’m planning events to raise money, including a big raffle where I hope to offer some great prizes.

“I thought it would be an amazing thing to be part of but, as it would mean being away from home for two weeks, I didn’t think I could do it.”

It’s early days, but Reuben’s Retreat is helping with fundraising ideas. So far, 80 people have signed up to do the climb, and a second trip has been added to start a few days later.

Of course, it’s going to be tough, but I’ve got a year to prepare and it will be an incredible experience. From now on, wherever I go, be it a networking event or a travel event, I will be talking about the climb to promote it.