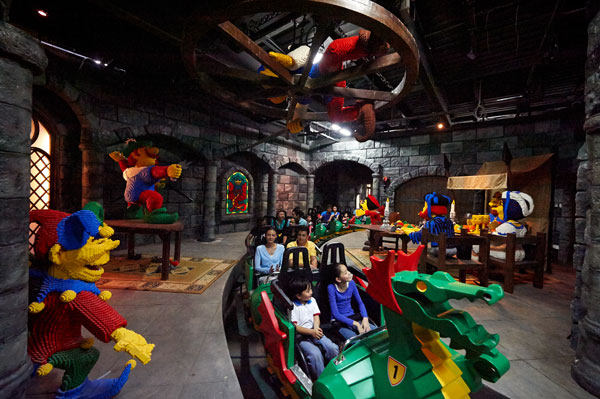 Theme park thrills from Madagascar, Kung Fu Panda and How To Train Your Dragon? Only in Dubai, finds Laura French.

I’m trundling along past life-sized Madagascar characters and colourful circus props on a flat, leisurely track. It’s surprisingly pleasant – so far, so good. Then there’s a sudden jolt, and my cheeks are hit with a G-force that makes me feel like I’m being sucked up by a vacuum cleaner.

We blast off rocket-style into a tunnel ringed with flashing blue lights, then plunge down into a pitch-black void that I fill with piercing screams.

“Then there’s a sudden jolt, and my cheeks are hit with a G-force that makes me feel like I’m being sucked up by a vacuum cleaner.”

The rest of the ride is a blur of trippy fluorescence and what feels like sound-barrier-breaking speed as my stomach plunges, my heart pounds and my head thumps. But it’s exhilarating, and I’m soon queueing up to do it all over again.

I’m riding the Madagascar Mad Pursuit rollercoaster at Motiongate, one of three theme parks (along with an all-weather water park) that make up the sprawling Dubai Parks and Resorts. 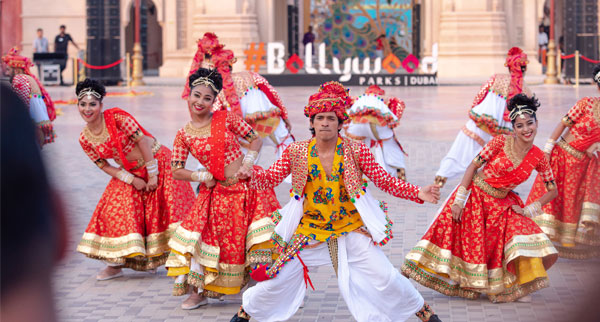 It’s one of several rides within DreamWorks, a colourful, enchanting indoor zone where attractions are based around animated films. It’s not all quite so hair-raising, though. A few minutes later, I’m riding a Kung Fu Panda simulator, then embarking on Dragon Gliders, a How-To-Train-Your-Dragon-themed family coaster that has us flying serenely over the park, projector screens glowing, jets of water spurting.

After DreamWorks we venture into Smurfs Village, where costumed actors wander among kid-friendly coasters, then drop into Columbia Pictures to try a water ride that has us splashing along the rapids in a giant inflatable tub.

Lionsgate brings more thrills – including a loop-the-loop rollercoaster themed around The Hunger Games, where we whoosh up at serious speed before plummeting back down along the bumpy, twisting track. Pleasingly, we don’t have to queue for any of it as the park is surprisingly quiet.

After Motiongate, it’s on to Legoland, a 10-minute walk away. Here we browse the indoor Miniland, home to Dubai-themed Lego sculptures including the Burj Khalifa, and try out The Dragon, a high-speed coaster that meanders its way around a Lego-built castle. There are water rides, Lego teacups, a ‘factory’, ‘driving school’ and more, but it’s more targeted at actual kids than twentysomething wannabe kids, so we amble over to Bollywood Parks instead.

Here, we whizz through five zones, eyeing family-friendly thrill rides and 4D theatre experiences, as Bollywood-themed dancers perform in front of a Taj Mahal replica, and Mumbai-inspired music blasts from the speakers. It’s like stepping into a real-life Bollywood film, and it achieves  that theme park illusion of being in an entirely different world.

Emirates Holidays offers a three-night stay at the four-star Lapita Hotel at Dubai Parks and Resorts from £686 per person, including access to the parks and return Emirates flights, based on two sharing a Deluxe King Resort View room between May 27 and June 26 on a half-board basis.
emiratesholidays.com