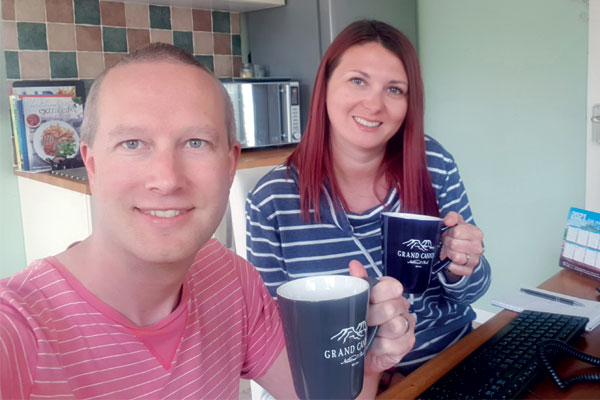 Can you imagine running a separate travel agency to your partner, from the same room during lockdown? Juliet Dennis reports.

Paul and Stacey Knapper live in a two-bedroom house in Malvern and are both travel agents – for different businesses.

When the government’s lockdown was imposed, they had to think about how to arrange their new work lives as separate agencies in the same house.

Paul, owner of Spires Travel in Worcester, works in the dining room, while Stacey, branch manager of Carrick Travel’s Pershore branch in Worcestershire, is in the kitchen after they sourced a desk from Paul’s parents.

Paul says: “I was provisionally set up to work from home but I’d never done so full-time. I’m used to working in the shop and talking to customers and staff. Working from home is completely different – you have to be regimented.”

“I log on and listen to all the voice messages and start replying to emails but I also find time to hang out the washing.”

For Stacey, who is handling all calls to her branch after the rest of her team was furloughed, the switch was harder. She says: “I’ve never worked from home before. When I first set my computer up, I sat there for 10 minutes and thought ‘how do I do this?’ Normally I’d drive for 40 minutes to get to work. The first couple of days I felt I had to be at my desk all the time.”

It took a few days before Stacey began to take breaks. “I log on and listen to all the voice messages and start replying to emails but I also find time to hang out the washing,” she says.

The pair now meet in the kitchen or garden for coffee breaks and lunch, and go for a walk each evening. Paul says: “We try to sit at our desks at 9am and work until 5pm. We are strict about it and are both busy. We try to have lunch together every day in the garden, as we have a lovely view of the Malvern hills, and we have a 10-minute tea break in the morning most days.

“If we need advice – if we have dealt with the same operators, for example – we will have a chat, but we try not to do that in our breaks. The idea of the breaks is to get away from work. It’s nice to have someone to talk to and not live and breathe work; the garden is a godsend.”

Paul adds: “There are pluses to working from home: no commute, getting up later, and having lunch in the garden. I’m coping. But if you gave me a choice to go back to work, I’d definitely go back to the shop. I like speaking to my staff and customers.”

Stacey agrees: “We’ve created a nice balance and this has encouraged us to do a bit more exercise. It’s got easier working from home but I definitely miss not having people around and I’ll be glad to get back to work.” 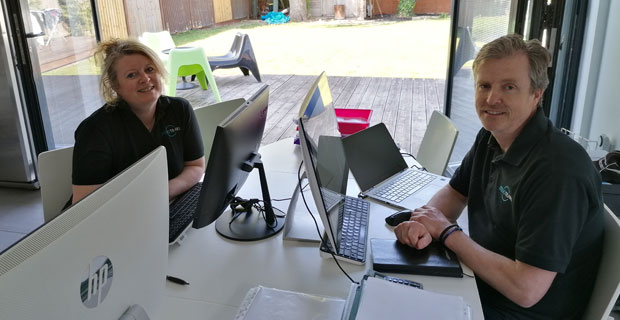 Paul and Claire Welling were just starting to establish a customer base for their second shop when the lockdown was announced.

The pair have a shop in St Ives, Cambridge, and opened a second branch of ItsSo Travel in The Grafton shopping centre in Cambridge last November after winning a year’s free shop lease in a Dragon’s Den-style contest.

The agency, a Global Travel Group member, has furloughed the Cambridge shop manager and put recruitment plans on hold. “This came at the wrong time and has knocked us back severely,” admits Paul.

The pair, who have two daughters, aged 21 and 18, at home, are now working across their kitchen table from each other in St Ives.

“We were snowed under at first, trying to cope with the sheer volumes. It comes in waves now and each day we have new clients to sort out as operators work through their lists.”

Having worked together since setting up the business five years ago, the couple are used to spending their days alongside each other. “This is easier for us then for a lot of couples,” says Paul.

All phone calls are directed to Paul’s mobile and they take turns answering. Paul adds: “We were snowed under at first, trying to cope with the sheer volumes. It comes in waves now and each day we have new clients to sort out as operators work through their lists.” Having each other to talk to has proved an enormous help, says Paul.

They have also settled into a routine, with Paul at his desk from 6.30am and knocking off around 4.30pm and Claire starting later. “We’re both keen runners,” he adds. “So Claire tends to go for a run first thing and I tend to go late afternoon. I find it easier now to switch off.”

For Claire, the upside of the new way of life is more family time. “We get quality time with the girls,” she says. “It’s difficult for them. One has had university cut short and one is worried whether she will get a place. But on the flip side, it’s given us time for bonding.”

The key is ensuring there is still a work-life balance, she says, adding: “If there are no emails, we do social media or marketing and we walk away from it if there is no work; we will not sit there worrying about it.”

The couple remain positive about the long term. “Most clients are fairly loyal,” says Paul. “They understand and rebook. Some have threatened chargebacks but we’ve explained they would put a family business out of business. We’ve written off this year for new revenue and are concentrating on 2021. We are eligible for small business rates revenue grants, so should get that soon, which will help pay salaries and ongoing costs. I’m fairly optimistic about the future.” 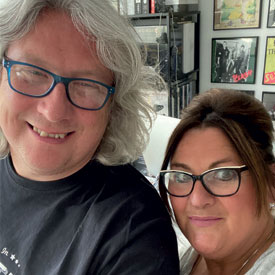 Joanne Dooey and Jimmy Martin are working in the extension of their Edinburgh home – and using their common love of music to get through each day.

Despite running separate agencies, they are working at either ends of the same room, and even answer each other’s phones if necessary.

Joanne, current president of the Scottish Passenger Agents’ Association, and one of her managers, are answering all calls to her three branches, in Motherwell, Coatbridge and Bellshill. She has furloughed 12 staff.

“My workload has got bigger now but whereas before I was always out arranging SPAA events, I’m spending more time on my business,” she says.

Joanne’s biggest ongoing challenge is to secure the government’s emergency business rate relief funding, which she believes her shops should qualify for. “I fall into one of the loopholes as the council aggregates the rates of my three shops. But I won’t give up,” she says.

She jokes: “I do get on my soapbox and so if I get on Jimmy’s nerves he goes for a walk. He’s more laid-back.”

Jimmy’s relaxed approach now extends to dressing more casually each day following the switch to homeworking. “We both get up like we are going to work and are at our desks at 8.30am. The only difference is that I’m in my shorts and flip-flops now,” says Jimmy, who has furloughed his team of five.

“I do miss the interaction,” he adds. ”Clients will come back to the high street. But it’ll be different. It’s taught me a lot. There will be winners and losers in terms of who [suppliers] we deal with.”

“We both get up like we are going to work and are at our desks at 8.30am. The only difference is that I’m in my shorts and flip-flops now.”

For Joanne, the experience has taught her she doesn’t need to travel as much. She says: “I’ve proved to myself I can work more efficiently. I’m going to change my way of working. I can Zoom-call shops instead of driving two hours.”

The fact Jimmy has been SPAA president twice has also helped, she says. ”I’m getting calls from the SPAA and we can bounce ideas off each other.”

The pair, due to get married next May, are determined to try to enjoy their new set-up too. Every day they take turns to pick one of their favourite music albums for the day – with Facebook friends also helping to pick.

“People have been voting on Facebook for our vinyl of the day; it’s been a bit of fun,” says Joanne. “We both like a bit of background music.”

The couple were due to attend scores of music festivals, which have now been cancelled due to the lockdown. “We are big music fans and we’ve lost eight or nine concerts we were supposed to go to,” says Joanne. “We’ve rescheduled everything. That’s my whole mindset now – reschedule.”