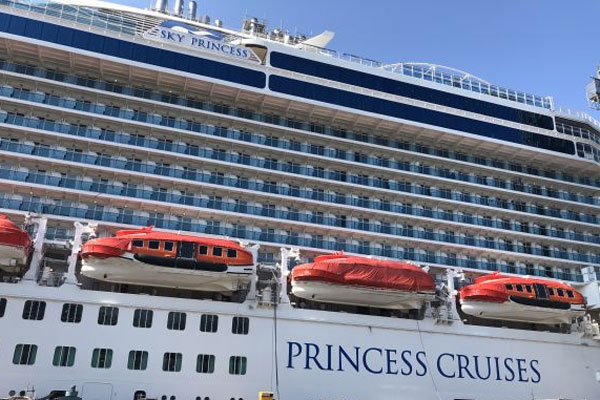 The line, at the centre of controversy over Covid-19 outbreaks on a number of ships, has extended its pause in global operations from June 30 – the date new ship Enchanted Princess had been due to be named in Southampton.

The delivery of the new vessel was previously delayed with the Carnival Corporation brand now cancelling its five-ship programme in Europe this summer on Enchanted Princess, Regal Princess, Sky Princess, Crown Princess and Island Princess as part of the new wave of suspended sailings.

Other cruises cancelled until the end of the summer season include:

Princess originally announced a voluntary pause in operations for two months, affecting  departures between March 12 and May 10. That was then extended in April through to June 30 before yesterday’s announcement.

The line made the “extremely difficult” decision to cancel select cruises through the end of the 2020 summer season due to reduced flight availability, the closure of cruise ports in regions around the world and “other factors impacting international travel”.

Princess pledged to protect travel agent commissions on bookings for cancelled cruises that were paid in full, “in recognition of the critical role they play in the cruise line’s business and success”.

Refunds are being offered but must be requested via an online form by June 15 or customers will receive refundable future cruise credits.

People who have booked and paid for the newly cancelled cruises have the option to receive a future cruise credit plus an additional bonus credit equal to 25% of the fare.

Princess will double the deposit, providing a refundable future cruise credit, for those who have not paid in full for the money currently on deposit plus a matching bonus FCC that can be used on any voyage until May 1, 2022.

The matching bonus FCC will not exceed the base cruise fare amount of the currently booked cruise and will have a minimum value of £100 per person.

President Jan Swartz said: “As the world is still preparing to resume travel, it is with much disappointment that we announce an extension of our pause of global ship operations and the cancellation of cruise holidays for our loyal guests.

“Among other disruptions, airlines have limited their flight availability and many popular cruise ports are closed.

“It saddens us to think about the impact on the livelihood of our teammates, business partners and the communities we visit.”