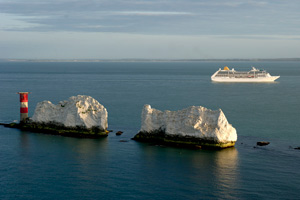 Adonia, the latest addition to the P&O Cruises’ fleet, has sailed into its home port of Southampton ahead of celebrity naming celebrations tomorrow (Saturday).

The 710-passenger vessel’s departure from a shipyard in the Bahamas was delayed by 15 hours following a refurbishment. A travel agent preview of the ship due to be held today was cancelled amid fears that the ship would not arrive in time.

But Adonia was able to make up time during the transatlantic crossing to enable it to arrive in Southampton on schedule. The ship is to be named by godmother Dame Shirley Bassey at a ceremony led by actor Hugh Bonneville at the port in front of 500 VIP guests.

Formerly operating for P&O Cruises’ sister company as Royal Princess, three quarters of Adonia’s cabins have balconies. Designated as an adults-only vessel, the ship is the smallest in the company’s fleet and be the first to offer Mediterranean fly-cruises from the autumn.