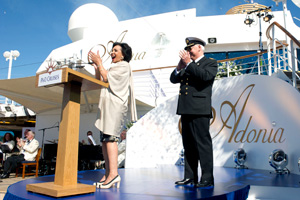 P&O Cruises aims to respond to increasing demand for single cabins both on existing and any future ships.

David Dingle, chief executive of parent company Carnival UK, gave a clear indication that catering for solo travellers was a priority for the company. Speaking at the naming of Adonia, the latest addition to the fleet, he said the company was “really keen” to look at opportunities to install more single cabins.

Although Adonia is the smallest ship in the fleet with a capacity for just 710 passengers and for adults only, it does not have any single cabins. The only ship in the seven-strong fleet to have cabins for passengers travelling alone is big ship Azura, which has 18.

But Dingle said the company was considering retro-fitting existing vessels with single cabins when they are due for refurbishment. He added: “I am very keen to have lots of single cabins on any other ships we may bring into the fleet.”

He said there was “no shortage of enthusiasm” for expanding the fleet but this had to be considered against a backdrop of parent company Carnival Corporation reining in expansion from six to three new ship orders a year up until 2013 in the wake of the global economic downturn.

Dingle said the economics of running a smaller adults-only ship like Adonia, which has a high percentage of balcony cabins, enabled the company to achieve an “above average” cruise price.

The ship has a target audience of older couples who have paid off their mortgages and were “economically isolated”.

P&O Cruises’ managing director Carol Marlow revealed that there was growing interest from teachers wanting to travel on child-free ships who “want a couple of weeks when they are away from children”.

Adonia was named by Dame Shirley Bassey with actor Hugh Bonneville acting as master of ceremonies in Southampton on Saturday at an event for 500 guests including many top agents.

The highlight for many was a spontaneous rendition of ‘Diamonds Are Forever’ by Dame Shirley before a fireworks display.