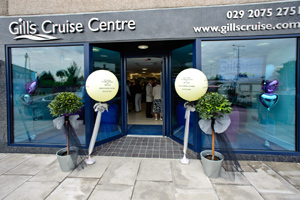 Gill’s Cruise Centre, which ceased trading on July 15 2011, was among the UK’s biggest cruise agents.

A family-owned firm, based in Cardiff, Gill’s had been selling cruises for 50 years. Its demise so close to the peak summer season could be taken as an indication of how tough the market has become for many companies, especially in light of the profits warning by Thomas Cook this week that triggered a collapse in the group’s share price.

However, the major cruise lines were quick to describe the Gill’s failure as a one-off.

Carnival UK sales and customer services director Giles Hawke said: “This is a unique incident relating to Gill’s. It does not reflect the state of the cruise market which continues to perform extremely well. A lot of agents are running very profitable cruise businesses.”

Royal Caribbean associate vice-president and general manager Jo Rzymowska agreed that the market remained healthy, saying: “The cruise industry is in good shape. This is just an unfortunate situation.”

Gill’s had been in terminal trouble for at least a fortnight after the major cruise lines switched to collecting payments direct from Gill’s customers to avoid any money going to the agency.

Royal Caribbean, Carnival UK and Fred Olsen Cruise Lines all confirmed to Travel Weekly on Tuesday of this week that they had acted to protect the money owed to them. By Wednesday, the cruise lines had the agency on stop-sell – meaning it could take no further bookings and therefore no further cash.

However, Travel Weekly understands Gill’s had been subject to special payment terms for a period before this and under financial scrutiny for some months.

The company sought to restructure and cut its costs in March, when it shut its central London office and relocated staff to its original base in Cardiff – from which it had moved to London in 2008.

But the move proved too little too late, amid suggestions from rival retailers that not only were Gill’s costs too high but also its discounts too low.

At the time, Gill’s chairman Alistair Gill described current trading as “a challenge”, while attaching some blame to a cut in base commission by P&O Cruises’ trade arm Complete Cruise Solution.

He subsequently downplayed the significance of the commission change, saying: “There are exciting opportunities out there.”

Leading figures in the cruise industry were full of praise for Gill’s past contribution to the sector.

Hawke said: “We have been trading with Gill’s for over 40 years. They were the top-selling agent for P&O Cruises in 1975. They have been a good partner for many years, had a fairly robust business model and attracted customers to cruising.”

Rzymowska said: “It is a very sad day for the travel industry and for cruise, in particular. We have traded with Gill’s since we began operating in the UK. It must be very tough for the staff.”

Both stressed that no customers would miss out on planned cruises. Hawke said: “We have spent the last two days reassuring customers, advising people they have no need to worry.”

Rzymowska said: “We have a dedicated team in place, a phone line and email address set up, and we are contacting every customer to ensure they know their holiday is safe.”