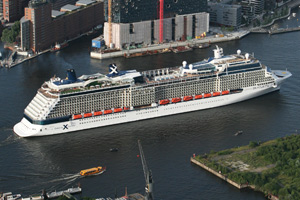 The line claims the 122,000-tonne ship carrying 2,880 passengers will be the largest to be officially named in Germany.

Celebrity Silhouette is one of 120 cruise ships due to call in Hamburg this year.

The new ship, including a range of new features such as an outdoor barbeque area, art studio and private cabanas, will be officially named by US travel agent Michelle Morgan.

She follows a Celebrity Cruises tradition in supporting breast cancer charities having battled the disease herself.

The ship also features designer boutiques from brands such as Michael Kors and Bvlgari and the Celebrity iLounge Apple internet café offering classes in using iPads and iPhones.

Celebrity Cruises has also launched an online game to help travel agents learn about Silhouette and the destinations it will visit in its inaugural season.

The vessel is the fourth in a series of five Solstice class ships costing a total of $3.7 billion. The final ship, Celebrity Reflection, is to be launched in 2012.

Following the official launch in Hamburg, and the first sailing from the city, the ship will run cruises to the Holy Land and eastern Mediterranean from Civitavecchia, the port of Rome.

Celebrity Silhouette will sail to the US to sail in the Caribbean throughout the winter from Cape Liberty in Bayonne, New Jersey.

Summer fly-cruise prices start at £1,199 for 12-nights in the Mediterranean.