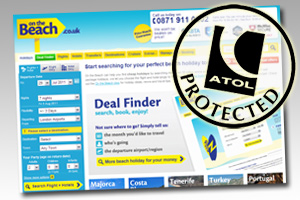 Online agent On The Beach believes it has stolen a lead on rivals by offering consumers 100% financial protection ahead of the introduction of a ‘Flight-Plus’ Air Travel Organiser’s Licence (Atol) early next year.

On The Beach chief financial officer Wendy Parry said: “We urge consumers to check the terms and conditions of other online travel agencies (OTAs) prior to booking.” And chief marketing officer Alistair Daly told Travel Weekly: “It is definitely a selling point. This is groundbreaking.”

On The Beach became the first independent OTA to offer full financial protection on Friday when it announced it had acquired an Atol licence for up to 300,000 holidaymakers a year and set up trust arrangements approved by the Civil Aviation Authority (CAA) and Abta.

The financial protection applies across the board – to all new bookings, including flight-only, accommodation-only and “flight-plus” sales, as well as to customers waiting to travel and those in resort.

In a statement, the company said: “On the Beach will be the only independent online travel agent in the UK to offer 100% financial protection. Other independent OTAs only offer part protection and do not cover individual elements such as hotel only.”

No-frills flights booked with On The Beach are protected by a combination of airline failure insurance and the trust arrangements, managed by Barclays Corporate. Overseas hotel accommodation, car hire, transfers and airport parking are also covered by the trust.

The move immediately placed the company among the top-10 Atol licence-holders and will be seen as a coup for the CAA ahead of the expansion of the Atol scheme proposed for January.

Daly expects some rivals go down the route of agent for the customer from January, to escape the need to acquire a new Flight-Plus licence. He said: “We will definitely see some companies going down that route. We decided to do what our customers want. We did some research with consumers and they wanted protection.”

On The Beach will add the £2.50 Atol protection contribution (APC) to licensed sales, but will pick up the administrative and financial costs of the trust scheme. Parry said: “We want to maintain our value-for-money proposition for customers.”

The company is backed by private equity firm Isis, which is understood to have wanted the company to go down the route of full protection. Abta is a party to the trust deed. The association has previously refused to accept trust arrangements for non-licensable tour operator transactions.