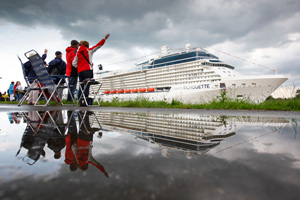 Celebrity Cruises, Royal Caribbean Cruise Line’s premium brand, has promised to increase its support for the UK market despite not bringing its new ship to these shore for inaugural celebrations.

While the line’s two previous ships Eclipse and Equinox were launched in the UK, Celebrity Silhouette’s inaugural celebrations took place in the German city of Hamburg.

However, key UK trade partners were invited the Silhouette’s naming and a further 200 will attend a celebration in Rome next week.

Last year the launch of Celebrity Eclipse, now sailing out of Southampton, made national headlines when the ship was diverted to repatriate Brits caught in the ash cloud crisis.

While Silhouette’s launch drew less attention from the media, Celebrity bosses expect its launch to have an impact.

Dominic Paul, RCCL’s UK managing director, said: “You do not get as much PR coverage when it’s the fourth ship in the class, but every new ship definitely has a bounce.”

Dan Hanrahan, Celebrity Cruises’ president and chief executive, said not bringing the new ship to the UK was not a sign of the line lowering its ambitions for the British market.

He said due to the timing of the launch Celebrity wanted the ship to start commercial activities as soon as possible. It will be based in Rome, an embarkation port popular with Brits.

“For us growth in the UK is terrific. We are having a record year and our pricing is way up on Eclipse. I think some other lines are struggling to develop themselves in the UK.

“We are now at the beginning of the battle and our reputation is growing in the UK. We have great relations with the trade and have a really strong sales and marketing team.

“We want to be growing other markets [such as Germany] but we are not taking any support from the UK to do that. We will be adding support to the UK.”

“We believe that with our product offering there is a great opportunity for new to cruise.

“This is very different, we think, and from what our customers tell us, to what else is currently in the market place – it appeals to a much wider group of people.”

Currently 25% of Celebrity customers are new to cruise.

The line has claimed it has been able to maintain prices this year and will look to build on that in 2012. “Everyone is looking for value, regardless of what bracket they are in,” Rzymowska said.

“As more and more people get to know the brand and what the product stands for then there is a market out there that is prepared to pay more for something they know and like.”