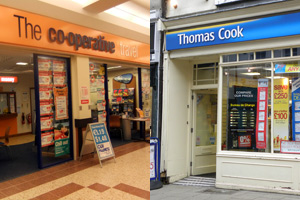 Unions representing retail staff at Thomas Cook, The Co-operative Travel and Midlands Co-operative will meet management over the next week to discuss plans for the new joint venture formed by the groups’ merger.

However, there are no plans for joint discussions between Thomas Cook, the Co-ops and the trade unions, leaving the unions to instigate their own joint talks.

The merger of Thomas Cook’s high-street retail division and the two Co-operative groups is expected to be completed by the end of next month. Transport union the TSSA, which represents staff at Thomas Cook, will attend a meeting with Thomas Cook on September 6.

Shop workers’ union USDAW and the Co-operative managers’ union, the National Association of Co-operative Officials (Naco) – which together represent staff at the Co-op – will meet Co-operative bosses separately.

Thomas Cook wrote to the TSSA last week to arrange a meeting to explain the merger process and consultation, and give details of the timetable.

TSSA travel officer Tony Wheeler said: “I intend to propose our own joint meeting with Usdaw.”