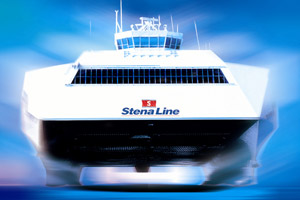 Soaring fuel costs have resulted in Stena Line suspending its high speed service between Holyhead and Dun Laoghaire from next month.

The daily HSS Explorer service will be withdrawn from September 13 until next year, and Stena Line is to begin a 30-day consultation with three unions representing 88 staff.

Stena Line said there was little freight traffic on the route, and that 73% of its turnover in 2010 was generated between May and September. The company will continue to run two traditional ferries year-round on the route between Wales and Ireland.

Stena’s area director for Irish Sea business Michael McGrath said: “Despite all our attempts to reduce operating costs over the last few years, it has not been possible to return the route to profitability.

“The vast majority of revenue from the fast craft service is generated from car and coach guests and is received during the peak summer trading period. We simply cannot continue to sustain these levels of financial losses.”

The firm said the roll-on/roll-off passenger (ropax) vessels on its other routes brought in freight income 52 weeks of the year.

McGrath told the BBC: “We believe the combination of our two ropax vessels operating from Holyhead to Dublin, combined with this seasonal fast craft service between Holyhead and Dun Laoghaire will provide our customers with the capacity and frequency that the market requires.”

Swansea to Cork ferry operator Fastnetline is cutting return sailings during the winter from three to two each week while Irish Ferries yesterday reported a halving of operating profits due to high fuel costs.