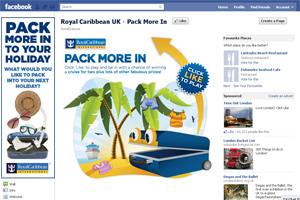 Cruise line Royal Caribbean is giving away iPads, Kindles and more in a 1980s-style arcade game on its Facebook page.

The Pack More In game is linked to Royal Caribbean’s latest advertising campaign, which focuses on how much holidaymakers can pack into one of the brand’s cruises.

Players can build up points by posting their scores on Facebook throughout September.

The game prompts players to invite four friends to play along while they collect items for their ‘suitcase’ before jumping onboard ship.

The 50 highest-scoring players overall will be entered into a prize draw to win a cruise.

“The new Facebook pages will also offer interactive activities such as the new Pack More In game.”

There is trade-only version of the game in the line’s Cruising for Excellence agent training site at cruisingpower.co.uk.

Royal Caribbean is currently encouraging agents to attempt to break the Guinness World Record for the time taken to pack a suitcase.

The attempt will take place on board Independence of the Seas on September 28 in Southampton.