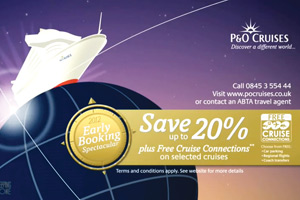 Complete Cruise Solution has insisted it is happy with sales volumes for 2012 despite reports from the trade that its three brands are suffering as agents focus on rival operators.

The trade arm of P&O Cruises, Princess Cruises and Cunard refused to verify claims from sources suggesting sales were well behind last year as it embarked on its latest early-booking drive.

Carnival UK sales director Giles Hawke said: “As a publicly listed company we do not talk about figures and trading except in annual statements.

“We are, though, very happy with our 2012 bookings. Our free cruise connections promotion and 20% discounts for 2012 cruises should improve this position further and give agents increased sales opportunities.”

The autumn sales push is offering customers free transfers to Southampton and valet parking for bookings up to the end of November on some 2012 cruises.

However, leading agents have told Travel Weekly that rival brands are getting more focus following CCS’s commission cut to 5% in April and move to force customers to pay direct.

One leading agent said this double whammy for agents had left many larger-volume players “disillusioned” with CCS.

National newspaper advertising by agents promoting CCS brands is understood to have slumped well below the operators’ 40% share of the market.

“Nearly every agent I have spoken to has said we will sell them but won’t push them,” one agent said. “They are going to run out of agents. CCS will kill them off by starving them of cashflow.”

Jason Peters, director of Creative Cruises, said customers know they can get a bargain if they wait for the lates market.

“People are just not booking next year, and why would you when there are still bargains this year?”