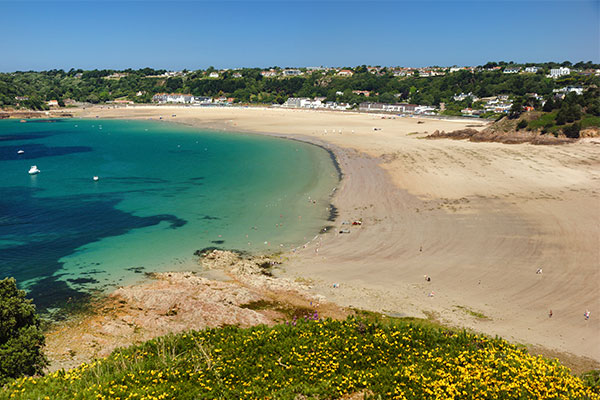 Domestic breaks are booming, so capitalise on the trend with Laura French’s guide to the best unique retreats and quiet escapes you might not have heard of

It’s official: the staycation is having a renaissance. Lockdown seems to have given us a new-found appreciation for all that’s around us, and from the honeycomb dunes of Devon to the dramatic mountains of Donegal, the tumbling hills of Surrey to the windswept trails of Scotland, there’s certainly a lot to be getting on with in our homeland and its nearest neighbours.

But with more people rediscovering the draws of British shores, hotspots are filling up fast – so where should you suggest for clients after a hideaway holiday where they’ll have the UK and Ireland’s most attractive landscapes all to themselves?

Farne Islands, Northumberland: England’s northernmost county doesn’t always get the attention it deserves, which means the majority of its soft-sand beaches, rolling hills and rugged walking trails lie happily untouched. There’s plenty to lure nature lovers, but the biggest jewel in its crown is the Farne archipelago – a collection of 20 pristinely preserved islands, home to thousands of puffins, grey seals slumped on craggy rocks and minke whales, bottlenose dolphins and basking sharks frequenting the shores.

While landing on the islands isn’t allowed, boats can take you sailing around them from the town of Seahouses. McKinlay Kidd includes a boat trip on its six-night Northumberland Dark Skies self-drive and pairs it with a walk along Hadrian’s Wall, an evening observatory experience and more from £695 B&B.
mckinlaykidd.com

Kilmartin Glen, Scotland: This remote spot, sandwiched between Oban and Lochgilphead on the west coast of Scotland, is home to some of the world’s most significant prehistoric remains, with Neolithic and Bronze Age stones jutting up from the landscapes, delineating a history stretching back more than 6,000 years.

Most impressive is its rock art, with 5,000-year-old carvings covering the rocks in spirals and other shapes whose meanings remain a mystery. Andante Travels offers a four-day tour taking in the best of them in the company of expert archaeologist Dr Tertia Barnett, with prices from £975 including accommodation, entry fees, coach travel and some meals.
andantetravels.co.uk

Elan Valley, mid-Wales: Its windswept coastline and wild national parks get the limelight, but don’t overlook the Elan Valley, a collection of man-made dams, reservoirs and waterfalls known as the Welsh Lake District. Red kites and migrating birds attract wildlife watchers, while its designation as a Dark Sky Park draws those after some serious stargazing.

For clients wanting to capture it all from behind the lens, Wildlife Worldwide has a new four-day photography-themed trip combining visits to Gigrin Farm – where red kites come to feed – with a dolphin and seal-spotting trip around the Ceredigion coast, plus daily night-sky photography classes. The three-night tour costs from £675, departing May 2021 and including most meals, transfers and guides.
wildlifeworldwide.com

Karma St Martin’s, Isles of Scilly: If you didn’t think you could get white-sand beaches and cerulean seas this side of the Channel, think again. The pint-sized isle of St Martin’s, 28 miles off the coast of Cornwall, offers both in abundance, as well as diving, snorkelling and other adventures in seal-studded waters warmed by the Gulf Stream.

For a standout base on the island, look to dog-friendly estate Karma St Martin’s, where a series of traditional stone buildings sit right in front of the beach, alongside a spa and organic vegetable farm. Three nights with Prestige Holidays starts at £582 per person, based on two sharing a deluxe room with breakfast and flights from Land’s End.
ukprestigeholidays.co.uk

The Wood Norton, Worcestershire: From its biscuit-hued stone to those lush-green hills, the Cotswolds knows how to turn heads – but go just beyond its borders and you’ll find plenty of other charms too. The Wood Norton is a Grade II-listed boutique hideaway set in the Vale of Evesham and built by the French Duc d’Orléans in 1897.

Today, it offers family-friendly rooms, manicured gardens and a French-inspired brasserie, with hot-air balloon rides and visits to the Cotswolds, the Malverns, Warwick Castle and Stratford-upon-Avon all on the table for those wanting to explore. Great Little Breaks offers a one-night break from £99, including dinner, bottle of prosecco and full English breakfast.
greatlittlebreaks.com

Greenhills Country House Hotel, Jersey: For an island escape that packs in sandy beaches and scenic coastal trails with excellent food and friendly people, few places beat Jersey – and away from the busier spots you’ll find a handful of rural retreats. Among them is Greenhills, a 17th-century house-turned-hotel with 33 characterful bedrooms designed to feel like an English country home.

There’s a peaceful garden, elegant restaurant and a lounge with a log fire, plus an emphasis on local produce such as Jersey royals and locally-made gins. Airways Holidays offers four nights’ B&B from £399, based on two sharing and flying from Gatwick on October 4.
airwaysholidays.com

But it’s the property’s 400-year-old Ivy Cottage in the village that really stands out, with lavish-yet-rustic decor, stone walls, two impressive bathrooms and a private garden complete with open-air hot tub, where guests can get food delivered from the hotel’s restaurant without needing to lift a finger. Prices start at £635 per night.
summerlodgehotel.co.uk

Tuath na Mara, Donegal, Ireland: With its dramatic mountain peaks, wild, weathered beaches and glossy mirror lakes, County Donegal has rightly earned itself a reputation as one of Ireland’s most enchanting spots. And for those wanting to stay in one of its most remote corners while taking in an architectural masterpiece, look to Tuath na Mara, an award-winning, contemporary-design property sleeping up to seven, created to look like it’s free-floating amid the landscape.

Accommodation is mirrored with a second open-plan living space and kitchen area so it’s a good option for bigger families, while outside there’s direct access to a secluded, sandy beach where clients will be hard‑pressed to find another soul. Oliver’s Travels offers a week from £1,355 for the whole property. Make sure clients check the latest entry requirements as current rules mean anyone travelling from abroad (but not from Northern Ireland) must self-isolate on arrival.
oliverstravels.com

Treehouses at Chewton Glen, Hampshire: If clients like the sound of sleeping among the trees, leaves brushing against the windows as they wake to the sound of birdsong, look no further than the New Forest’s renowned Chewton Glen, whose Treehouse Suites offer exactly that – with a high-end twist. Sleeping up to six, these unusual retreats hang 10m above the ground, with outdoor terraces and hot tubs overlooking the forest, plus marble bathrooms, TVs and wood burners for the ultimate in rustic luxury.

For those wanting to really go all out, there’s the Yews, sleeping up to 12 and complete with a personal chef who’ll take care of all your dining needs in the serviced kitchen. Prices for a Treehouse Studio Suite (sleeping two) start at £1,500 per night, including a breakfast hamper delivery.
chewtonglen.com

Best of the rest secluded staycations

Isle of Harris, Outer Hebrides: For a remote retreat far from the madding crowd, the Outer Hebrides is hard to beat. Kuoni offers a self-drive taking in the highlights, including the Isle of Harris, where crofters weave Harris Tweed and wild Atlantic waves crash beneath a mountain skyline, from £675 including six nights’ B&B.

Glen Affric, Scotland: Verdant valleys, misty lakes and dramatic mountain vistas: the Highlands are the stuff of fairytale books and among the most impressive spots is Glen Affric, where ancient pine forests meet shimmering lochs and colourful moorlands – with barely anyone around to interrupt the views. Wilderness Scotland has a five-day Autumn Highlands trip, departing from Inverness, priced from £1,095.

Hideaway Cottage, Ashford Castle, Mayo: This former boathouse set on the shores of Lough Corrib offers the best blend of total seclusion – think private gardens, an outdoor terrace on the jetty, 24-hour in-room dining and a fully stocked bar, plus two bicycles to go exploring – with access to the amenities of the castle hotel. The Hideaway Cottage costs from €3,000 per night B&B.

Five of the best family staycations