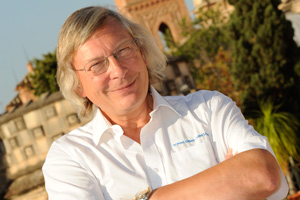 Over the past two decades the cruise industry has seen enormous growth and one family name has risen to prominence capturing a slice of the traditional end of the British market.

Fred Olsen Cruise Lines, despite its Norwegian ownership, is very much a UK-based brand but this year one of its leading lights, and an elder statesmen of the industry, will leave the company.

It’s hard to overstate just how important Nigel Lingard has been to the UK’s fourth-largest cruise operator, but as he prepares to sail into semi-retirement it’s worth recalling the origins of the brand.

From ferries to cruise

In 1988 Fred Olsen decided to close its North Sea ferry services. This left it with just one cruise ship, Black Prince, a raft of redundancies to make and an uncertain future.

It was down to Lingard and his team to come up with a business plan that would convince the Olsen family that putting their name’s reputation on the line was worth the risk.

Lingard recalls this period as the biggest challenge in his 23-year career with Fred Olsen.

“We had to make presentations and put together a business plan that was credible for them to invest in. It’s been a rocky road, but the family sees shipping as a core part of their business.”

Lingard freely admits it hasn’t been possible to deliver exactly on that 1988 plan, but it did envisage a fleet of five ships, something achieved when Balmoral joined the fleet in 2008.

“We reached our goal but it took longer than we thought, but then the ships are bigger than I would have guessed.

“I never thought we could have a 1,300-passenger ship and get away with calling it small.”

The pace of Fred Olsen’s development has not been something entirely under its control, reliant as it has been on the availability of second-hand ships.

Lingard said growth would have been achieved more quickly but for competitors being reluctant to sell on a couple of occasions.

The line would also by now have had its own purpose-built cruise ship but for the weakness of the pound against the euro.

Lingard says plans for an additional ship remain very much on the radar for Fred Olsen. And it could be a new-build, if the market allows or if ship-building expertise develops in parts of the world with a more favourable exchange rate.

But in the meantime the operator, and the rest of the cruise industry, needs to get on with absorbing the massive capacity increase that coincided with the “perfect storm” of 2008.

This 40% capacity increase came just as the recession hit, sparking a price war from which the cruise industry will take some time to recover, Lingard predicts.

As he explains: “What slightly mitigates growing cruise in an orderly manner is the way new capacity arrives in big blocks: you can’t introduce half a cruise ship.

“You have three years of nothing and then we all add ships. Unfortunately, 2008 was a perfect storm. There was all this new capacity delivered that had been ordered in 2005 and 2006 and the recession came in the middle.

“We’ve not really successfully filled the 2008-introduced capacity at a competitive price, although we are filling the ships.”

Lingard estimates prices in the market are 15% down on what they ought to be based on figures for what he describes as “the last successful year” in 2007.

Lingard admits he is facing the future with some trepidation but is looking forward to spending more time with his wife, Sonia, and travelling more. He quite fancies a cruise on a luxury ship.

But he also promises to rise like a “phoenix” in some small capacity before full retirement.

One abiding memory he has of the cruise industry is the way the lines, despite being fiercely competitive, have always worked together.

“The industry co-operates and we as a company, and I as an individual, have enjoyed playing our part in that,” he said.