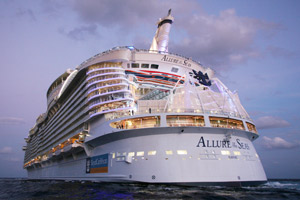 Demand for future cruises across brands in the Royal Caribbean Cruises stable was described as “solid” as the company reported an improved summer profit.

The parent company of lines including Royal Caribbean International, Celebrity Cruises and Azamara Club Cruises achieved a 14% rise in net profit to $399 million in the three months to September over the same period last year.

The improvement was fuelled by “particularly strong” demand for Caribbean and Alaska cruises with both markets seeing increases of more than 15% in ticket yields and Alaska yields reaching an all-time high.

Revenues were up to $2.3 billion in the three months compared to $2.1 billion in the third quarter of 2010 as a result of capacity increases and yield improvements. Net yields for the quarter increased by 5.3%.

Looking forward, Royal Caribbean said: “Though economic uncertainty is elevated and it is still early in the booking cycle, 2012 demand thus far has been solid. Booked load factors and pricing are both running ahead of this time last year, which supports the company’s expectation of continued yield accretion during 2012.”

Chairman and chief executive Richard Fain said: “It was gratifying to beat both our revenue and cost forecasts in the third quarter despite the turmoil in the worldwide financial markets.

“The strength of our brands, combined with the value of our product, provides us with a high degree of economic resilience, and both our 2011 results and our 2012 booking patterns validate this.”