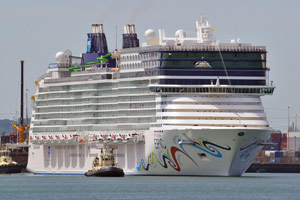 Norwegian Cruise Line has hailed a strong summer season for an 18% jump in quarterly profits.

Operating profits were up to $162.7 million in the three months to September while adjusted EBITDA came in 13.4% up at $210 million over the same period last year. Net revenue grew by 4.6% to $491.6 million mainly as a result of an increase in net yield of 3.8% driven by higher ticket prices.

Net cruise costs declined by 5.3%, excluding a 17.9% rise in the price of fuel, helped by ongoing business improvement initiatives coupled with non-recurring expenses in the third quarter of 2010 related to the launch of Norwegian Epic last year.

President and chief executive Kevin Sheehan said: “A strong summer season resulted in solid top-line growth in the quarter. “Pricing was up across the fleet despite several voyages being impacted due to tropical weather conditions in the [US] Northeast and Caribbean.”