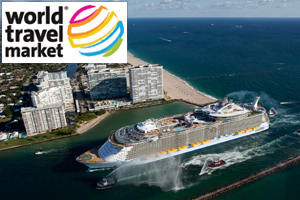 Royal Caribbean Cruises’ decision “so far” is to not follow Carnival UK cutting agents’ commission, but the operator’s US boss conceded it was “the kind of thing that we look at all the time”.

Speaking at the Captains of Industry lunch on the opening day of World Travel Market, Fain said:  “We rely on agents to sell our cruises because it’s more profitable for us to do so.

“To do it ourselves would be less effective and more costly. Cruises are sold and not bought, so we need good, knowledgeable agents to sell them – just like sales assistants in shops, who don’t just sell you a dress, but all the accoutrements like the shoes, belt, scarf and purse too.”

When asked what he thought of Carnival UK’s move earlier this year to cut commission paid to agents to a flat 5% from 12%-15%, Fain said: “We need to work well with agents and not end up in self-destruction. There is no perfect way to work with them, but there are many wrong ways to do it.

“It has been our decision so far to not make the same move [as Carnival UK], but it’s the kind of thing that we look at all the time. It’s been a really tough year and travel agents are feeling that too, so that slows our process of change on this.”

Asked once more if he was considering major commission changes, he said: “We consider things all the time.”

Fain said the UK market was clearly feeling the effect of the “lousy economy” which was making some people “a little more cautious” and more inclined to hold back, but he said it was not alone.

“We’re feeling the same push back, but no more in the UK than anywhere else. And he added: “We are more highly booked here than we were a year ago and people are booked at a higher price than they were this time last year.”

Richard Fain will be in conversation with Travel Weekly editor-in-chief Lucy Huxley in the Cruise – A View from the Bridge session on Tuesday November 8. The session takes place in Platinum Suite 4 at 2pm.