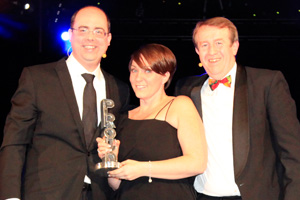 A sales manager from Club 18-30 has walked off with the top award as Thomas Cook UK & Ireland recognised its staff at a ceremony in London.

Kylie Paramanis received the chief executive officer’s (CEO) Employee of the Year award for 2011 at the ceremony attended by 600 staff at Battersea Evolution in London.

The event, which was held prior to Thomas Cook Group releasing its delayed financial results confirming the closure of 200 agency branches, highlighted one person from its 19,000 strong UK & Ireland team to win the top accolade.

Other individuals and teams were also recognised for embodying the company’s ‘PROUD’ values – Pioneering our Future, Results Orientated, Obsessed with Customer Service, United as One team and Driving Robust Decisions.

As part of her prize, Paramanis will be an ambassador for the company in 2012, which will include attending many of the travel industry’s top awards ceremonies and Thomas Cook events, including attending the opening ceremony at the London 2012 Olympic Games in July, as a guest of mainstream CEO Ian Ailles and independent CEO Phil Aird-Mash.

Paramanis has worked at Cook for 10 years, starting off in its sales centre for Thomas Cook Direct before progressing to team leader, then moving overseas for Thomas Cook Signature. She started working as sales manager for Club 18-30 in 2008.

She received many personal recommendations and was presented with the award for her outstanding performance in all aspects of her job, hitting all performance targets and for her “unbelievable commitment” to the company’s specialist brands, particularly Club 18-30.

The Tunisia and Egypt in-resort, rescue-flight and duty-office teams were also recognised, winning the CEO Team of the Year award. They were praised for unity as one team delivering outstanding customer service, team work and professionalism during the disruption caused by the unrest in Egypt and Tunisia.

Ailles said: “We’re extremely proud of all of our people at Thomas Cook and have thousands of outstanding people in our stores around the country and overseas in resorts, and in support functions in the UK.

“However, Kylie, the Tunisia and Egypt teams and all of our annual PROUD award winners have really gone the extra mile to deliver fantastic results in each of their fields this year, making them stand out from an already exceptional crowd.”

Other big winners were: