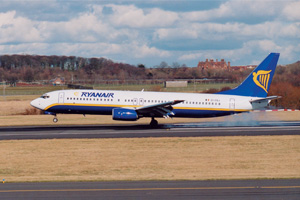 Ryanair is establishing its 50th European base in Cyprus in a $140 million investment.

From April the airline is to operate 14 routes from Paphos in a challenge to flag carrier Cyprus Airways.

The no-frills airline will serve Stansted as part of the new network from the island which will involve to aircraft being based at Paphos.

The airline expects to carry 600,000 passengers to and from the new base in the first year of operations with 80 weekly flights.

This will sustain more than 600 jobs and represents an investment of more than $140 million at Paphos airport, Ryanair estimates.

Tickets go on sale tomorrow (Wednesday) for the 14 routes, which include Frankfurt (Hahn), Oslo, Stockholm, Rome, Milan and Krakow.

Alfred Ven der Meer, CEO of Paphos airport holding company Hermes Airport Group, said: “This is a great vote of confidence in the potential of both the airport and our region from Europe’s largest airline.

“Today’s announcement will help create much needed jobs and tourism and shows that Ryanair shares our confidence in the tremendous opportunity for strong market growth at the airport.”