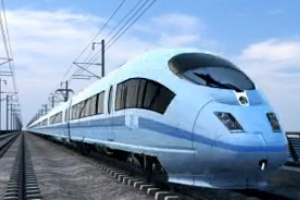 A connection to Heathrow is included in future plans for the controversial £32.7 billion UK high speed rail network.

The network will provide direct, high capacity, high-speed links between London, Birmingham, Leeds and Manchester, with intermediate stations in the East Midlands and South Yorkshire.

There will also be direct links to Heathrow and to the Continent via the existing HS1 line from London.

“It will form a foundation for a potentially wider high-speed network in years to come,” said Greening.

“HS2 will be built in two phases to ensure that the benefits of high-speed rail are realised at the earliest possible opportunity.

HS2 will generate benefits of up to £47 billion and fare revenues of up to £34 billion over a 60-year period, Greening estimated.

“The faster journeys on HS2 – Edinburgh and Glasgow will be just 3.5 hours from London – could transfer around 4.5 million journeys per year who might otherwise have travelled by air and 9 million from the roads,” she added.

Greening announced a package of alterations in an attempt to appease opponents to the biggest railway construction projects since the Victorian era.

“The changes mean that more than half the route will now be mitigated by tunnel or cutting and there will also be a reduction in the impacts on people and communities, ancient woodlands and important heritage sites,” she claimed.

These include more tunnels in the Chilterns and other areas along the proposed line.

“Despite these improvements to limit the negative impacts of the line, HS2 will inevitably affect some homeowners, communities and businesses,” Greening admitted.

“To help those affected, we will bring in a package of measures, which are over and above what affected homeowners are already entitled to under law.”