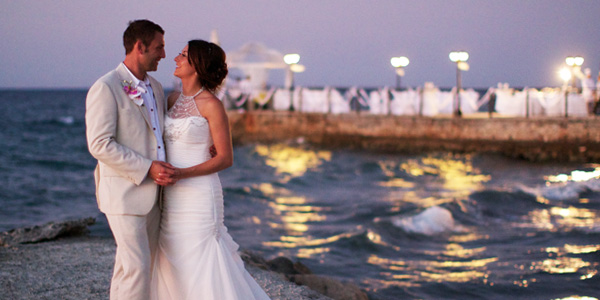 Romance is in the air in Cyprus, birthplace of the goddess of love herself. Aphrodite’s island offers year-round sunshine, beautiful views and saying “I do” with sand between your toes – all less than a five-hour flight away.

And with UK weddings typically costing £20,000 or more, compared with an average £6,000-7,000 in Cyprus, the financial benefits are also luring couples abroad – meaning agents can pick up some healthy commissions.

Lillian Panayi from the Cyprus Tourism Organisation says: “The whole ‘island of love’ ethos adds a bit of extra appeal.

“The size of the groups is also getting bigger and because Cyprus is a holiday island, it lends itself to the honeymoon as well.”

Tying the knot in picturesque hotel grounds remains the most popular option, with many couples preferring to keep the ceremony, reception and honeymoon in the same place.

So White Boutique Hotel, a luxurious five-star resort near Ayia Napa, is set to open in April, offering wedding ceremonies in its tropical gardens overlooking the ocean and hiring out its roof terrace and Japanese restaurant as reception venues.

Some operators sell combined wedding and honeymoon packages, while others separate the ceremony from the holiday, meaning couples can mix and match to get the right deal for them. Agents can also earn extra commission by suggesting the couple fly out before booking to check out possible venues.

Planet Holidays, one of the first to offer weddings in Cyprus, has everything from a no-frills package at £495 to an all-inclusive extravaganza featuring reception, three-course meal for 20 guests and all the extras for about £6,500.

Niki Nicola, wedding coordinator at Cyplon Holidays, says many couples prefer to marry in hotel grounds because they have more privacy than on a public beach.

Cyplon’s typical wedding-plus-honeymoon packages start at £2,500. A one-week stay at Elias Beach Hotel in Limassol with a ceremony on the beautiful pier starts at £2,800, not including extras such as the reception, flowers or photos.

Some of the 34 hotels offered by Olympic Holidays give a discount for couples holding the reception with them, and give clients the flexibility of choosing colours or upgrading elements of their wedding package when they arrive at the resort. A ceremony at four-star Golden Coast Beach Hotel in Protaras starts at £460, and a one-week stay at the hotel can be added for £1,300.

Cosmos Holidays starts its hotel-based packages at £839 for the Hotel Louis Imperial Beach in Paphos (not including accommodation), rising to £1,515 for its top-end venues.

Thomas Cook’s options include getting married in the amphitheatre at the Elysium in Paphos, from £1,379, while a romantic ceremony in the beach gazebo at St Raphael Resort, Limassol, starts at £1,149 including photos and flowers.

For a family-friendly wedding, First Choice offers St George Gardens Family Club in Paphos, starting at £1,045, while couples keen for some pampering can try the five-star Atlantica Aeneas Resort & Spa in Nissi Beach, from £1,669, where they will also get 15% off treatments.

Couples looking to venture out of their hotel to tie the knot can choose from an array of venues across the island.

Religious ceremonies can be performed at many churches in Cyprus, including the 13th-century Ayia Kyriaki Church near St Paul’s Pillar, and St George’s Chapel, both in Paphos.

Town halls are also a cheaper alternative, with the Grecian columns of Paphos Town Hall making a beautiful backdrop for the wedding album.

Olympic Holidays can book Paphos Town Hall from about £240, with fees and extras charged on top. All-inclusive packages are also available for the town hall, with Ionian Weddings offering a wedding coordinator, flowers, transfers, car, photos, three-course meal and wine for 20 people for about £2,100.

Beach weddings are a relatively new phenomenon in Cyprus, but are available at several hotels including Palm Beach Hotel & Bungalows in Larnaca, and Columbia Beach Hotel in Pissouri Bay, which recently got the royal seal of approval when Zara Phillips and husband Mike Tindall stayed.

But if waves lapping on the shore are not quite enough, couples can get hitched as they sail the island’s crystal waters.

Thomas Cook’s yacht packages start at £899, although bookings made before April 1 will qualify for about £125 to help pay for extras.