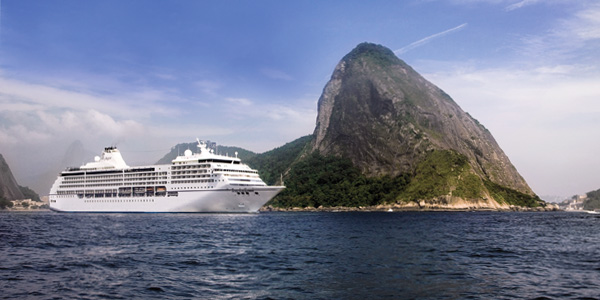 There are plenty of reasons for clients with sea legs to love Latin America.

The area is home to one of the world’s mightiest rivers – the Amazon – and the most unique wildlife habitat – the Galapagos Islands – both of which are really best viewed from the water. But this isn’t the beginning and end of the cruising potential.

Clients can round the southernmost tip of the continent at Cape Horn, or even channel a bit of Sir David Attenborough and sail off from Argentina to explore Antarctica.

Plus, cruise lines are whisking passengers off to vibrant cities such as Buenos Aires and Rio de Janeiro, and through the Panama Canal. And for those who don’t fancy an entire holiday afloat, we’ve included a few shorter trip ideas to tempt them off land.

Amazon cruises only travel along a portion of this river – no surprise, when you consider it is more than 3,750 miles long. Major ships cruise up from the delta to the Brazilian city of Manaus.

Here, clients can see the legendary ‘meeting of the waters’, where the dark Rio Negro flows alongside the coffee-coloured Solimoes. Crystal Serenity and Regent’s Seven Seas Mariner both sail from Rio north around the Brazilian coast, down the Amazon to Manaus and up to Miami via the Caribbean, travelling for 21 and 22 days respectively.

Smaller expedition cruising vessels often ply the narrower waterways of the Peruvian Amazon, embarking from Iquitos. Cruises often last three, four, or seven nights, and with ships offering only a handful of cabins, guests can immerse themselves in the experience, although there are fewer on-board facilities. Latin America specialist Rainbow Tours offers trips on Aqua and Aria, with a three-night, full-board itinerary from £1,603.

The animals and plants of these remote islands 625 miles off the coast of Ecuador are so unusual they inspired Charles Darwin to formulate his theory of evolution. Stringent restrictions to ensure tourism doesn’t damage the islands limit the number of ships that visit every year. Rules coming into play this month prevent ships from visiting any site more than once in 14 days, so many have changed their itineraries.

The 90-passenger Celebrity Xpedition offers seven and10-night cruises, otherwise UK luxury and Latin America specialists use a range of small ships, with the 10-cabin Galapagos Grand Odyssey – offered by Bales Worldwide among others – one of the newest additions to the Galapagos’ fleet.

The epic landscapes of Patagonia, with glaciers, fjords and plenty of wildlife, plus the thrill of rounding South America’s southernmost point, all combine to make a cruise around the Argentine and Chilean coasts a popular option. Many of the major cruise lines offer this option over two to three weeks, including Celebrity, Princess, Silversea, Seabourn, P&O and Holland America Line.

For those who aren’t looking for an entirely water-based holiday, Cruceros Australis operates expedition cruises between Ushuaia in Argentina and Punta Arenas in Chile. Three and four-night options both navigate around Cape Horn and through the fjords of Tierra Del Fuego, and feature in many tour operators’ Patagonian itineraries.

Journey Latin America offers a 15-day Wilderness Patagonia trip that includes the Cruceros Australis cruise alongside time in Santiago, Buenos Aires and the Torres del Paine National Park, plus a catamaran cruise to the San Rafael glacier. The trip starts at £4,937 excluding flights from the UK.

The Panama Canal was built so ships didn’t have to sail around Cape Horn, and the shorter route between the Pacific and Atlantic Oceans has become just as iconic. Cruises tend to start and end in Florida and California and spend about three days transiting the canal, with the rest of the two-week itinerary travelling through the Caribbean and up the Mexican coast.

Itineraries are relaxed without too many ports of call and quite a few days at sea, so this is one to suit more ship-bound cruisers.

For a winter-sun alternative to the Caribbean, cruise lines are offering journeys along the Brazilian coast. Itineraries often hop north from Rio to Buzios before heading south to Paraty and Ilhabela, and on to Punta Del Este and Montevideo in Uruguay, finishing in Buenos Aires.

Options for winter 2012-13 include Azamara Quest, Silver Cloud, Seven Seas Mariner and Crystal Serenity. P&O’s Arcadia will cruise from Southampton to Tenerife before following this route on an 18-day voyage ending in Buenos Aires. Royal Caribbean offers three, four and seven-night options along the Brazilian coast.