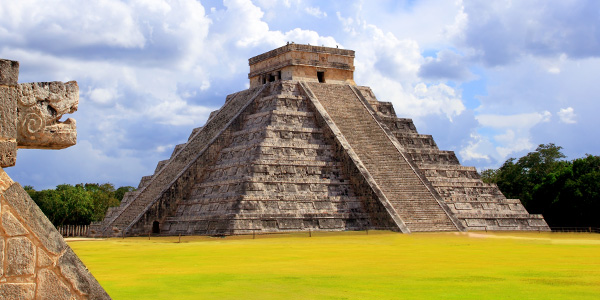 They tracked stars and solar eclipses, built elaborate cities and monuments without machines, and developed one of the world’s first written languages – so it’s no wonder the ancient ruins of the Maya civilisation fascinate tourists.

This year is expected to see a record number of visitors flocking to the region – which covers modern-day Mexico, Belize, Guatemala, El Salvador and Honduras – as the Maya calendar’s ‘Long Count’ comes to an end on the winter solstice, December 21.

Scholars are keen to stress this just means the beginning of a new chapter in human history, according to the Maya legends, but with several operators offering new packages based around the awe-inspiring ruins, why wait?

We take a look at some of the best sites to visit when exploring the fascinating history of the Maya people.

Where is it? On a spectacular clifftop on Mexico’s Caribbean coast, 80 miles south of Cancun.

What’s it like? Tulum is one of just a few walled cities built by the Maya, and was a key trading post with other nations. Its intriguing structures include El Castillo, the Temple of the Descending God and the Temple of the Frescoes, used as an observatory for tracking the movements of the sun.

Best for: Proximity to the beach. It is within easy reach of Cancun, making it the perfect day trip, and is smaller and easier to get around than some other sites.

Where is it? In the heart of Mexico’s Yucatan peninsula, between Cancun and Merida.

What’s it like? It was one of the largest Mayan cities and is extraordinarily well-restored, boasting some of the best architecture and the largest ball court in the region, where losing players were sometimes sacrificed to the gods.

Best for: Quality and convenience. Accessible by day-trippers from Cancun, Chichen Itza is further than Tulum and feels more remote. On a Mexican tour, it’s the perfect last cultural stop before beach time on the Riviera Maya.

Where is it? Southern Mexico, near the Guatemalan border and 80 miles south of Ciudad del Carmen.

What’s it like? Palenque has some of the finest architecture, sculpture and bas-relief carving in the Maya region – and it’s not as well known as other sites so its not as crowded.

Surrounded by a wildlife-filled jungle, this is where the spectacular jade-covered sarcophagus of Palenque’s best-known ruler, Pakal, was discovered.

Best for: Feeling like Indiana Jones. Colin Wilson, sales director at Page & Moy Travel Group, says: “Its jungle setting alone makes it breathtaking and while smaller than some sites, it has been estimated that just 10% of the site has been discovered so far. The rest is hidden within the jungle, making it an incredibly fascinating place to explore.”

Sample product: Travelsphere offers a 14-day package from £1,999 including accommodation, flights and transfers, with trips to Palenque, Teotihuacan and Chichen Itza, plus other highlights.
travelsphere.co.uk
0844 567 9966

Where is it? Deep in the north Guatemalan jungle.

What’s it like? With the peaks of its tallest pyramids reaching above the forest canopy to emerge from a sea of lush vegetation, Tikal is a magical site not to be missed.

It was among the largest Maya cities and capital of one of its most powerful kingdoms, boasting superb examples of ancient temples and palaces.

Best for: Spotting wildlife among the ruins. James Thornton, global sales general manager at Intrepid Travel, says: “The five large granite temples are an awesome sight, and a climb to the top offers a spectacular view. If you’re lucky, you might see howler and spider monkeys, as well as toucans, macaws and other birds.”

Sample product: Intrepid Travel’s nine-day Mayan Explorer takes in Tikal and other Mayan ruins from £955 including accommodation, some meals, but excluding flights.
intrepidtravel.com
0800 781 1660

Where is it? Northwest Honduras, less than 40 miles from the border with Guatemala.

What’s it like? This was once the seat of power for a vast kingdom in the southern Maya region, and its royal complex, the acropolis, is a must-see.

Best for: Skillful stonework. Copan boasts more sculptures than any other site in the Maya region and is known for its grand plazas and highly-decorated pyramids, including an intricately carved hieroglyphic stairway. It became a World Heritage Site in 1980 and is an awe-inspiring example of the Mayans’ creativity and engineering abilities.

Honduras has much to offer beyond the Mayan site of Copan. The Pico Bonito National Park is an area of lush, untouched rainforest and towering mountains. The Bay Islands were home to the original pirates of this region. The main island of Roatan, once home to 5,000 of these outlaws, is now an idyllic retreat popular with divers.

Sample product: Rainbow Tours’ 10-day Mayan World itinerary introduced this year takes in Guatemala, Honduras and Mexico – including Copan – and gives an option to add a few days on Mexico’s Riviera Maya, from £2,785 including all flights, transfers and B&B accommodation.
rainbowtours.co.uk
020 7666 1260