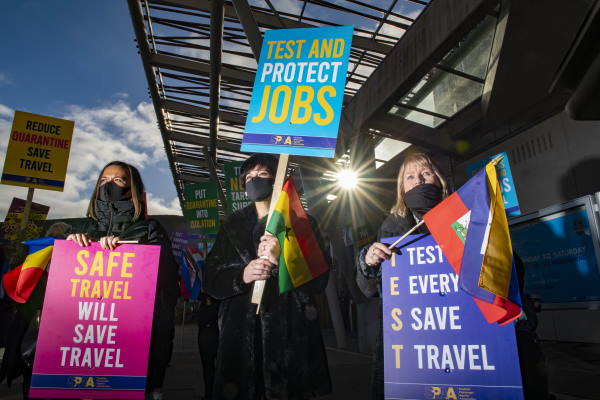 Travel agents in Scotland have been granted £5 million by the Scottish government as part of a £185 million support package for businesses.

Tour operators and coach companies were handed £6 million as part of Holyrood’s scheme and visitor attractions are set to benefit to the tune of £1.5 million.

Other industries such as hairdressers, taxi drivers and the wedding sector are also set to benefit.

The Scottish Passenger Agents’ Association (SPAA), which has been lobbying for sector-specific support since March and protested outside Scottish parliament last month, welcomed the announcement.

President Joanne Dooey said: “This is hugely welcome news for travel agents who have been forced to remain open as businesses since March to help their clients with cancellations and refunds, but who have had nothing to sell and no one to sell to.

“We’re delighted that months of lobbying by our members, including our protest outside Holyrood in November, has been successful and that the Scottish government has listened to us, and recognised the dire position which many travel agents have found themselves in, and has acted upon our detailed proposals.

“We look forward to working closely with the Scottish government on a delivery mechanism for this cash support to agents across Scotland.”

President Jacqueline Dobson said: “For months, we have been working hard to ensure that, not only the plight of the travel industry in general is heard in Scottish Parliament, but that politicians specifically understood the challenges faced by travel agents. We have spoken extensively with all political parties to demonstrate just how hard hit our sector has been and this move today demonstrates that we have been heard.

“While full details have still to be released, this will go some way to providing critical support to businesses until we can see a real route to recovery with the vaccine.”

An Abta spokesperson said: “Scottish travel businesses have been struggling since the start of the pandemic – the restrictions on travel meaning they are unable to generate income, so this news will come as a relief to many Abta members. It is also a really important move in supporting the Scottish economy, recognising that the outbound travel industry contributes £2bn every year to the economy of Scotland and the role travel will play in the country’s economic recovery.

“We encourage our members in Scotland to apply for these grants. We will be engaging with the Scottish government on the details of the scheme, working with the SPAA, and will update members in due course.

“It is now essential that the Scottish government puts a testing regime in place to cut quarantine and help to support consumer confidence.”

Julia Lo Bue-Said, chief executive of the Advantage Travel Partnership, said the announcement was “fantastic news for the hardworking travel agents who have worked tirelessly throughout this year, who have generated little to no revenue due to the ongoing lockdowns and travel restrictions”.

She said the Scottish government “has listened to the issues that have been raised by the sector”, and provided the package for “those who need it most”.

The announcement was made on Wednesday in the Scottish Parliamentary budget update by finance secretary Kate Forbes, who said she had written to the treasury calling for Scotland to receive its share of rates relief reimbursed by supermarkets “to ensure this is spent on those areas hardest hit as part of Scotland’s recovery from Covid-19”.

Forbes said: “I am pleased to confirm an allocation of £185 million for new and additional business support in the new year. We have listened to businesses and this assistance will be provided on a sector-by-sector basis, targeted at those who need it most.

“I am listening to the needs of business and we will continue to review and refine our Covid-19 support offer within the available resources.”

Barrhead Travel, the TSSA union, Advantage and Abta all called for the government in Westminster to follow suit with a similar package for the entire UK.