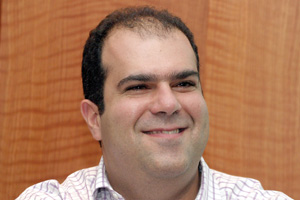 EasyJet founder Sir Stelios Haji-Ioannou has stoked up a row over executive pay at the airline by claiming it is trying to find a legal loophole to block him from voting at tomorrow’s annual meeting.

He claimed his treatment was “beginning to feel like one of Putin’s elections in Russia,” according to reports today.

Sir Stelios, who with his family holds a 37.4% stake in the airline, plans to vote against several AGM resolutions including those concerning re-election of chairman Mike Rake and directors’ pay.

Some require a 75% vote in favour to pass, giving him the effective power of veto.

He accused easyJet’s lawyers of making “frivolous and vexatious demands” for confidential details about how he and his brother and sister decide to vote.

Sir Stelios owns just over a quarter of the company, his brother Polys 11.1% and his sister Clelia less than 1%.

EasyJet said it issued him, along with other big shareholders, a standard notice to identify its shareholders.