Wise up to what’s new with Laura French’s
guide to the latest and upcoming openings.

The world’s tallest building, the world’s highest hotel, the world’s biggest mall the city of superlatives isn’t one to rest on its laurels and this year is set to be no different, with new resorts opening by the dozen, offering everything from artsy hangouts to culinary havens, luxury escapes to family adventures and plenty in between.

The long-awaited Dubai Expo and a host of new attractions add to the emirate’s appeal, along with a simplified entry process that now includes the option of PCR testing on arrival. If your clients are looking forward to a luxury escape in 2021, here’s our pick of the city’s newest stars to recommend.

Opened last October in the lesser-visited neighbourhood of Oud Metha, this obelisk-shaped structure has taken French art de vivre as inspiration and thrown in Egyptian-meets-UAE touches – think doors reminiscent of an Egyptian temple, pillars adorned with hieroglyphics and a giant golden falcon dominating the lobby. There are 498 rooms, each overlooking Dubai Creek, with key draws including a L’Occitane spa, gym, kids’ club and outdoor pool. Restaurants span Asian, British and French cuisines, including the latest opening from celebrity chef Daniel Boulud.

“Think doors reminiscent of an Egyptian temple, pillars adorned with hieroglyphics and a giant golden falcon dominating the lobby.”

Book it: Book it: From £110 per night room-only for a Deluxe Room sleeping
up to three adults and one child.
Sofitel-dubai-theobelisk.com 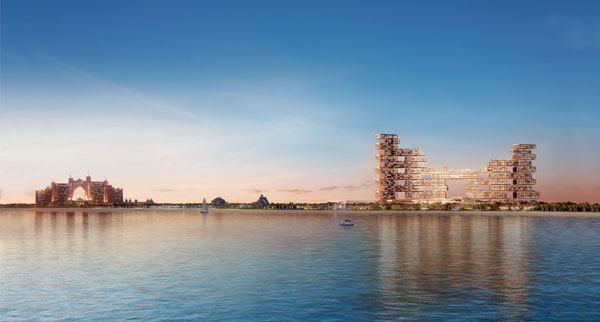 Originally due to open in 2020, The Royal is set to be one of the biggest openings of the year. Overlooking the Gulf, the hotel rises 43 storeys and offers 795 luxury rooms and suites – 44 of them with their own private pools. It features a rooftop infinity pool, boasts restaurants headed by celebrity chefs including Heston Blumenthal, Gordon Ramsay and Gastón Acurio, and provides easy access to Atlantis attractions Aquaventure Waterpark, The Lost Chambers Aquarium and Dolphin Bay. “With its stunning profile, this looks set to provide even more choice for the discerning luxury traveller,” says John Poulton, Gold Medal’s destination manager for the Middle East.

“Overlooking the Gulf, the hotel rises 43 storeys and offers 795 luxury rooms and suites – 44 of them with their own private pools.”

Book it: Rates to be confirmed.
Atlantis.com/dubai/royal-atlantis 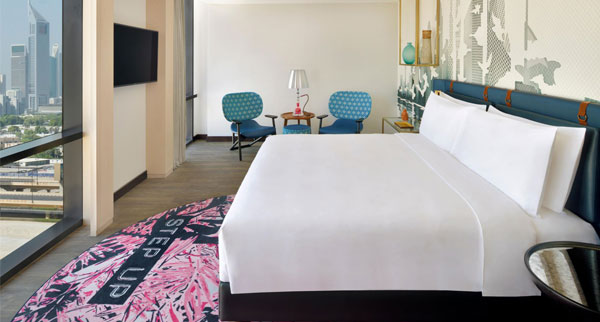 Book it: From £78 per night for a Standard King Bed Pool View (room-only).
Ihg.com 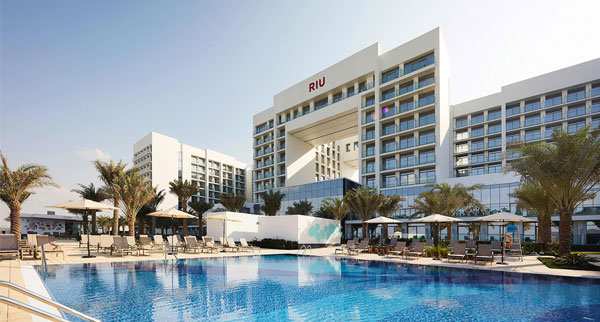 Few openings look set to beat this family-focused behemoth, which opened in December with 750 rooms, alongside a water park, five pools (two for children), swim-up bars and a spa, all set by the beach on new waterfront development Deira Islands. It’s a 20-minute drive from Dubai Creek and its atmospheric souks, but the biggest selling point is its 24- hour all-inclusive offering, which provides round-the-clock snacks and drinks, alongside themed meals at its array of restaurants, nightly entertainment, daily activities at the RiuLand kids’ club, and watersports such as kayaking and paddleboarding.

“The biggest selling point is its 24- hour all-inclusive offering, which provides round-the-clock snacks and drinks, alongside themed meals.”

Book it: Emirates Holidays offers three nights’ all-inclusive from £759 per person, based on two sharing a double room with flights from Heathrow, for travel on select dates between May 1 and July 6.
Emiratesholidays.com 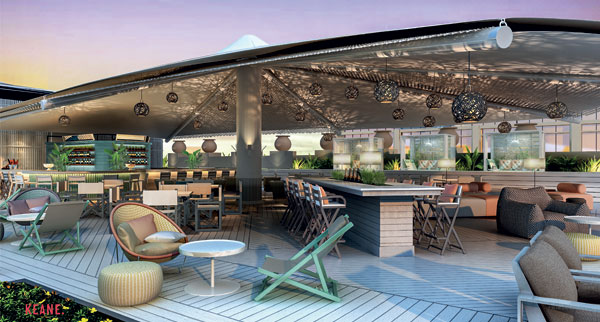 This oceanfront property – Marriott’s first foray into Dubai – is set to open on Palm Jumeirah in September with a private beach, pool, spa, fitness centre and Kidz Club, plus eight restaurants serving Korean, Italian, Mexican, Japanese and beyond. There’s also a rooftop bar serving Peruvian food – complete with a garden maze at its entrance, in true Dubai style – and every room comes with its own private balcony, offering views across the glimmering Gulf. It’s handily located on the Palm’s West Promenade, with watersports on the doorstep and key attractions including the Burj Khalifa and Dubai Mall a short hop away.

“There’s also a rooftop bar serving Peruvian food – complete with a garden maze at its entrance, in true Dubai style.”

Book it: Rates to be confirmed.
Marriott.co.uk 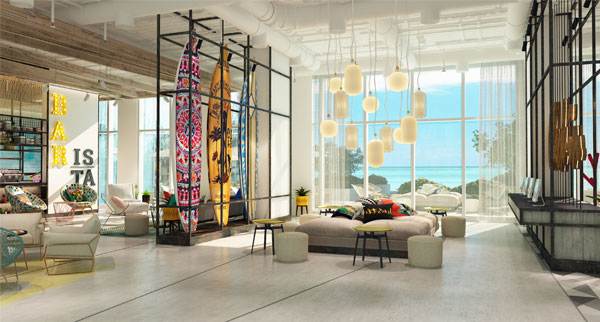 The latest addition to Dubai’s quirky, budget-friendly Rove collection, this trendy outpost has just opened in the heart of the eclectic La Mer district with a pool, casual restaurant and wallet-friendly rooms. “There are just two room types for ease of selling, alongside interconnecting room options, and each has a Juliet balcony with views over the city or sea,” says Nicola Hain, Middle East product manager for Premier Holidays. The hotel is a stone’s throw from the beach and the boutiques and coffee shops of the promenade, and is well-positioned for exploring Downtown and the Al Fahidi Historical District.

“The hotel is a stone’s throw from the beach and the boutiques and coffee shops of the promenade, and is well-positioned for exploring Downtown.”

Book it: Premier Holidays offers four nights’ room-only from £599 per person, including flights from Heathrow in May.
premierholidays.co.uk 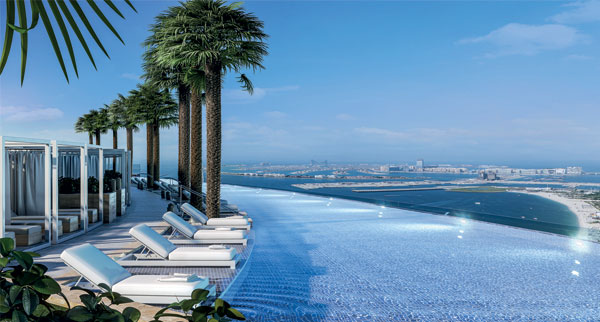 The newest kid on the block in the iconic Jumeirah Beach Residence district, Address Beach Resort opened in December with 217 rooms and suites in a 74 storey, double-tower complex that also houses residential apartments. “Address has some lovely properties in Dubai, and this is the brand’s first beachfront property,” says Uma Campbell, product and marketing manager at Lusso. “It looks set to be an excellent addition to the city’s beach hotels and overlooks Blue Waters Island, home to the iconic Caesars Palace.” There’s a private beach and spa, with restaurants serving Lebanese, Brazilian and beyond, but the crowning glory is the rooftop infinity pool, which lays claim to being the highest in the world.

“The crowning glory is the rooftop infinity pool, which lays claim to being the highest in the world.”

Book it: From £235 per night room-only for a Deluxe Marina View Room, sleeping up to three.
addresshotels.com 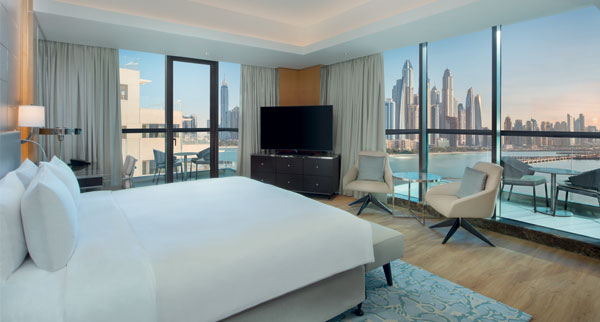 Dubai isn’t exactly short on Hilton properties, but this one looks set to steal the show on the culinary front when it opens later this year, with some of the city’s most popular venues opening outposts at the hotel, including Trader Vic’s, home of the original Mai Tai; Claw BBQ, known for its American feasts; and Jones the Grocer, a ‘food emporium’ focused on artisanal suppliers. The all-new Factory by McGettingan’s, meanwhile, will put a modern, cocktail-serving twist on an Irish bar, while French-inspired all-day dining room Salon de Thé means there’ll be no going hungry, whatever the hour. There will also be a kids’ club, spa and ocean-view pool, with balconies in every room for idyllic skyline views.

“This hotel looks set to steal the show on the culinary front when it opens later this year, with some of the city’s most popular venues opening outposts here.”

Book it: Rates to be confirmed.
Hilton.com

Museum of the Future: This six‑storey, futuristic feat – its facade covered in Arabic calligraphy – is set to open soon with a series of immersive experiences that use virtual reality, big data analysis, artificial intelligence and other high‑tech innovations to explore questions around the future of humanity.

Ain Dubai: This is set to be the world’s highest Ferris wheel – revolving to a height of 210 metres and offering 360‑degree views of the city – when it debuts on the JBR beachfront in the spring.

The View at The Palm: Just in case Dubai’s existing smattering of sky‑high viewpoints don’t satisfy, The Palm Tower is providing another one in the form of The View, a 240m‑high observatory offering panoramic vistas from its 52nd floor – reached by a three‑minute, immersive lift up from the Nakheel Mall – and complete with an interactive museum, cafe and souvenir shop.

Legoland Hotel: Dubai Parks and Resorts is set to get its first Lego‑themed hotel this year, with Lego‑themed rooms, a Lego castle play area and rainbow exterior among its features, while Bollywood, Lionsgate and Motiongate will expand with new attractions.

The hotly anticipated Expo 2020 in Dubai is retaining its name but will now run from October 1 to March 31, 2022. Exhibitors from more than 190 countries will showcase their cultures and accomplishments. Highlights will include a US space exhibition, Amazon-inspired sensory experiences, a Stephen Hawking-inspired area and plenty beyond.
Expo2020dubai.com

“Dubai is always one of our top-three destinations. When the travel corridor was granted a few weeks ago, we saw an instant triple-digit increase in demand for winter-sun travel. This year will be especially exciting with the opening of the postponed Dubai Expo and some new hotel developments to look forward to. We’re really excited about Atlantis, The Royal, and the new 24-hour all-inclusive Riu Dubai, which is bound to be a big hit with families looking for great value and convenience.”

Add-ons to soup up a city break in the Middle East
Six of the best winter Maldives escapes
The best way to spend 48 hours in Kuala Lumpur, Malaysia