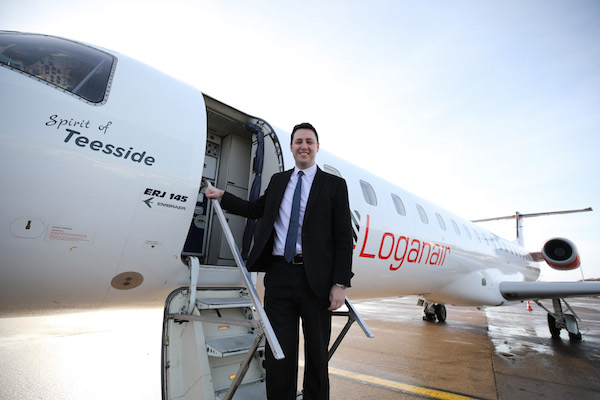 A new route between Teesside airport and Heathrow is to be operated by Loganair.

The service, which starts on March 8, is initially planned to run twice a day Monday to Friday with a single flight on Sundays.

Weekend frequency will increase to one morning flight on Saturdays and two on Sundays from March 28.

Loganair’s interline agreements will offer single ticket benefits including through check-in, through luggage to final destination and protected connections in the event of delays.

The Heathrow launch builds on a partnership between Loganair and Teesside airport announced in November, which saw the Scottish airline return to the north-east of England under its new ownership after an absence of two and a half years.

Flights from Teesside to Aberdeen and Belfast City are due to start next month followed by with Dublin, Jersey and Newquay connections in the summer.

Up to seven flights a week are scheduled to Dublin and Belfast City, six a week to Aberdeen, three a week to Newquay and twice weekly to Jersey.

Loganair chief executive Jonathan Hinkles said: “We understand the uncertainty around travel right now and are therefore pleased to be able to look towards the future by providing what Teesside International will need as and when lockdown restrictions begin to ease.

“We’re very happy to be returning to Teesside International, and we are back for good. We look forward to working with the team at the airport and the wider Tees Valley Combined Authority.

“There’s no doubt that air travel is having a difficult time right now, but I’m confident that our plans for Teesside International are both viable, appropriate and flexible now and for the longer term.”

Tees Valley mayor Ben Houchen said: “Securing flights into the capital with Loganair is another feather in our airport’s cap.

“The fact that in the next few days you will be able to go on to the websites of the likes of British Airways, Qatar and United Airlines and book flights from Teesside to hundreds of destinations across the globe shows just how far we’ve come since taking the airport back into public ownership and saving it from closure less than two years ago.

“The team is working tirelessly behind the scenes to bring back new bars, restaurants, duty free and a better customer experience with brand new security features, scanners and more check-in desks to manage the increasing number of passengers we’re expecting once we get through this pandemic.

“We look forward to welcoming people back through our great airport when restrictions allow and it is safe to do so.”