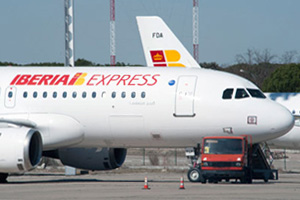 British Airways’ parent IAG launched budget carrier Iberia Express in Spain on Sunday with plans to grow rapidly on domestic and international routes despite an unresolved dispute with pilots.

The low-cost operation launched with a fleet of four Airbus A320s, but Iberia Express should have 14 aircraft and a staff of 500 by the end of the year as it takes over an increasing proportion of the Iberia network.

IAG’s announcement of the launch last year triggered a series of one-day strikes by Iberia pilots in December and January. The 1,600 pilots planned a further 24 days of strikes from March to June.

However, the pilots’ union called off the action on March 12 after the Spanish government agreed to appoint a mediator in negotiations with the airline.

Iberia Express chief executive Luis Gallego said: “The containment of costs will allow Iberia Express to grow and compete with the low-cost operators. Iberia Express will have the best of Iberia and attributes associated with the express concept.”

The new airline will be managed separately from Iberia, but use Iberia’s maintenance and other facilities.

The carrier will fly to Dublin, Naples, Mikonos, Riga and Amsterdam this summer, and to Vigo, Santiago de Compostela, Granada, Minorca, Ibiza, Fuerteventura, Lanzarote and La Palma in Spain. It has advertised domestic fares from €25 (£21).