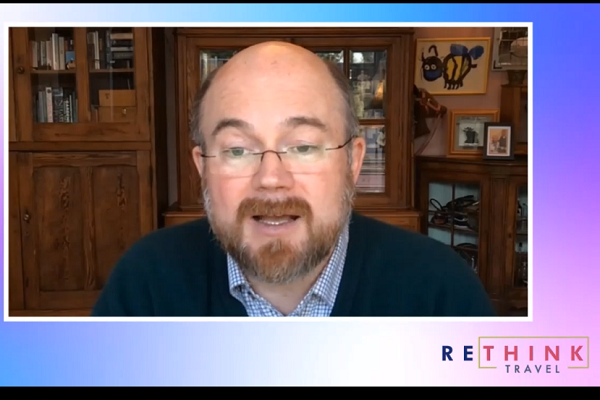 A leading professor of outbreak medicine believes there is “scope” for a Covid vaccine to be linked to people’s passports in order to ease their personal travel restrictions.

Speaking at the Institute for Travel and Tourism (ITT)’s virtual forum today, Professor Calum Semple, of the University of Liverpool, said such a move – backed by former prime minister Tony Blair – was a “possibility”.

He said the idea was being considered by “a number of experts and government advisors”, adding:  “I think this is acceptable. We do have the technology and we do have the testing ability.”

Predicting it will be driven by commerce, he said that, “in six months to a year’s time”, “it will be possible to have had a test that says ‘you’ve had a vaccine, you’re a good responder, you’re likely to be immune for the next year, two years or six months, and have that information on a dynamic app.

“As far as travel goes, I think there would be scope.”

Professor Semple said testing for travel was a “short term solution” but would “break between two thirds and four out of five episodes of highly-infectious people boarding” transport, “particularly using lateral flow testing”.

“I do think there is a role for lateral flow testing,” he said. “It’s as easy as a pregnancy test, it’s a result within 30 minutes, and it avoids the cost and complexity of molecular diagnostics which require you to book a test three days in advance”, and which Professor Semple believes “are only as good as the day it’s taken” and “over sensitive”.

He said it was unlikely that one type of test would be internationally accepted. “I don’t think there will ever be one solution for everyone,” he said, noting “the competitive nature of industry” and competition regulations.

“But I think there will be a move to rapid tests either at or shortly before the point of departure,” he said. “So if you have to check in three hours before a long-haul flight there’s more than enough time. I think that’s what will become the new normal, at least for a few years.”

Professor Semple expects restrictions will be in place until at least Easter after which time they may begin to be relaxed because “we will have vaccinated the vast majority of people at risk of severe disease” and “the weather improves”.

Though he said it was potential “challenge” to relax restrictions in “environments that are harder to maintain fresh air exchange” such as ships and aircraft “if there’s an issue around filtration systems” being changed resgularly.

Otherwise, he said there would be “opportunities for super spreading” and warned the industry “it may be quite expensive” to ensure “fresh warm air” which reduces the chances of spread but believes it could “pay dividends” later.