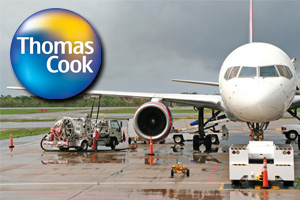 Thomas Cook Airlines has taken the precaution of loading some aircraft with extra fuel to ensure flights to strike-hit Spain operate even if they are delayed.

Managing director Frank Pullman, reflecting on yesterday’s general strike which forced many services to and from the country by other airlines to be cancelled, said:

“We’ve operated more than a dozen flights into and out of Spain since the strike began, and none have been delayed by more than 50 minutes, with the majority departing bang on time.

“Despite the fact that a number of other airlines cancelled flights in anticipation of the strike, our practice is always to operate the full schedule of flights to avoid causing last minute disappointment for customers.

“Our staff and agents have worked hard to ensure that all our flights operated and we’re pleased that our customers are able to enjoy their holidays without disruption.”

He added: “To ensure we continue to offer a smooth and prompt service to Spain, as a precaution we are carrying extra fuel on certain flights.”

Transport employees in Spain provided a previously agreed basic level of service, with airports reported to be mainly operating normally with about 10% of flights cancelled.

But the strike action forced the first flight by budget airline Vueling between Cardiff and Barcelona to be cancelled. The maiden service has been rescheduled for tomorrow (Saturday).

The service, on Tuesdays, Thursdays and Saturdays, will be the airline’s first direct UK service to Barcelona.