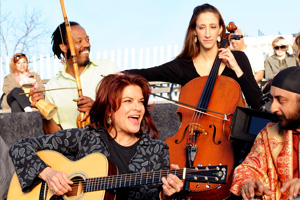 An original song by the daughter of Johnny Cash will form the basis of a new tourism marketing campaign for the US.

Brand USA, the public-private body set up to be the country’s first national tourism board, revealed the new song by Grammy award winner Rosanne Cash at the Pow Wow conference in Los Angeles on Monday.

The song, called Land of Dreams, will be featured in TV adverts in three core markets including the UK from May 1 as part of an initial three-month campaign costing $12.3 million.

The adverts will also be seen in Japan and Canada as part of a multimedia campaign which will include print, web and outdoor advertising, social media and a new TV show called USA All Access which will be available online at discoveramerica.com.

Jim Evans, chief executive of Brand USA, said: “Our goal is nothing short of rekindling the world’s love affair with the USA – the place, the spirit and the dream.

“We asked ourselves ‘how can we best speak to multiple countries, across countless languages and cultures?’We found the answer lay in the only truly universal language – music.”

The adverts will feature Cash singing the song under the Brooklyn Bridge with musicians from around the world.  As an extension of the campaign, musicians are being invited to visit the US to perform their own music at their favourite locations before sharing their experiences through social media.

The three-month campaign in the UK is believed to have a budget of around £2 million.