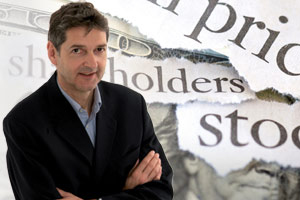 We will see the first official estimate of UK economic growth in the first quarter of the year on Wednesday amid signs that the calm which descended over economic forecasters and financial markets since the turn of the year could be drawing to a close.

Most recent indications pointed to a revival in the world economy, bolstered by better-than-expected US economic data and the aversion of a meltdown in the euro-zone. The result was that stock markets rose almost continuously from December until Easter.

Falls in the London Stock Exchange, on Wall Street and in Germany and France yesterday may not yet mark a shift. They appear to have been triggered by a first round election defeat for President Sarkozy of France and the failure to agree government austerity measures in the Netherlands, allied to the appearance of some weaker economic data.

Recession was confirmed in Spain and a closely-watched index of economic activity in Germany fell to a near three-year low.

In the US, the Federal Reserve was expected to announce this week that the recovery is strong enough to forego further quantitative easing – a message that was considered sufficient to send a shudder through the markets.

The Financial Times quoted one analyst suggesting: “Markets have become accustomed to persistent monetary easing. This could prove a more difficult investment backdrop.”

However, evidence of underlying problems was never far away despite the apparent resolution of the euro crisis. At the end of March, the Financial Times reported: “European finance ministers have been warned the underlying causes of the European debt and banking crisis have yet to be resolved.”

Confidential reports by EU officials described the European Central Bank’s provision of more than €1 trillion (£833 billion) in cheap loans to banks as merely “a reprieve”. It warned: “Contagion may re-emerge at very short notice … The euro crisis is not over.”

Just before Easter, European finance ministers agreed a 40% enlargement of a bail-out fund for troubled euro-zone states, taking it to €700 billion (£583 billion).

That came on top of the €1 trillion and in addition to a separate bail-out fund accumulated by the IMF (International Monetary Fund). The IMF fund swelled from $500 billion (£320 billion) to about $660 billion (£420 billion) last week through a series of additions, including a promised contribution of almost £10 billion from the UK.

Yet the FT pointed out the €700 billion in the European fund “remains far less than the combined borrowing needs of Italy and Spain for the next two years”.

FT columnist John Authers noted: “It is hard to see how Spain could be rescued with the funds the EU has available. That is why the IMF is drumming up more.”

Meantime, the UK economy contracted by 0.3% in the last quarter of 2011. The Organisation for Economic Cooperation and Development (OECD) forecast it would contract again (by 0.4%) in the first quarter of this year, putting the UK technically back in recession.

Other forecasts contradict this. The consensus among economists is for shallow growth of perhaps 0.1% in the first quarter, meaning an annual UK growth rate of 0.3%. That is economic stagnation to you and me.

However, the Bank of England (BoE) monetary policy committee has warned it can “not rule out the publication of official data showing GDP falling for three successive quarters”.

Indeed, the BoE has already forecast a contraction in the second quarter of 2012 due to the spate of bank holidays during the period (Easter, May Day, Whitsun and the Queen’s Diamond Jubilee).

The same committee warned: “There is a risk inflation could fall less rapidly in the near term than the Committee had anticipated in February … The latest upward pressure on prices is liable to delay the point when real household income will begin to rise again.

“Further contractions in output in the first and second quarters might further damage household and business confidence, even if the underlying pace of economic expansion were stronger.”

So barring an as-yet undetected acceleration in growth, the economy remains in a parlous state. In the words of one leading economist: “What was already the slowest recovery in modern times has got even slower.”

UK GDP remained 4.1% below its pre-recession peak ahead of tomorrow’s announcement. The implications for outbound travel demand are fairly obvious. The market should by no means deteriorate, but demand is hardly likely to leap forward.