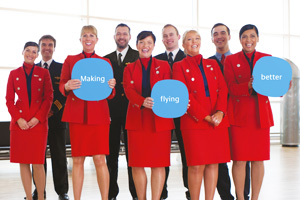 Flybe has revamped its fares and product in an effort to counter “negative perceptions” about low-cost flights and “growing resentment” at unbundled fares.

“We’ve done a lot of research and found there is growing resentment and a lack of trust over the unbundled airline model. A minority want it, but an increasing majority want an upfront price sooner.”

Flybe will scrap debit card charges from the end of this week – it previously charged £8 per booking – and move to a £9 fee per booking on credit cards, down from £13.
It will also move to three types of fare:

An ‘Essentials’ fare – the lowest the carrier offers, giving an assigned seat, no charge for check-in and 10kg allowance for hand luggage.

‘New Economy’ – allowing a free hold bag, seat assignment at the point of booking and unlimited changes of date to a booking for no fee, plus a booking confirmation by text. This will cost £19 more than the Essentials fare on a flight.

‘Plus’- aimed at the corporate market, giving all the above plus executive lounge access and added flexibility, with fares from £99.

Lilley said: “We aim to create the most transparent pricing in the industry.” He added: “We think the New Economy fares will become the norm.” The fares launch from the end of this week, when a new website will go live with the booking process cut from five stages to four.

Flybe will launch a national “Making flying better” advertising campaign this weekend, initially in national and regional print titles, and commence a first-ever TV campaign next week. The £9 million marketing campaign will be fronted by pilots and cabin crew and run through the rest of the year.

The carrier promises further innovations to come, including smartphone booking in May, and in-flight Wifi and TV programming in a summer trial.

In addition, the carrier is working with airports to improve the airport experience. Lilley said: “We aim to get passengers through an airport in 20 minutes from arrival to boarding.”

He told Travel Weekly: “Our research showed people want a hassle-free experience on short-haul flights. They want price, convenience and schedule, but there are things they currently dislike about the low-cost experience.”

Lilley added: “Making flying better is more than a slogan. It is a promise.” The new ticket types will all be available through global distribution systems (GDSs) as well as on flybe.com