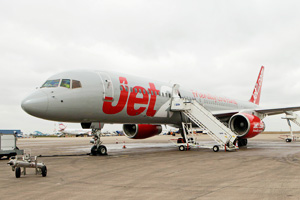 Jet2.com has joined Monarch in adding services from East Midlands following British Airways’ announcement that it will close Bmibaby and its base at the airport.

Regional carrier Jet2.com will launch eight routes from East Midlands over the next 12 months, flying to Chambery and Geneva this winter and to Dubrovnik, Menorca, Nice, Ibiza, Larnaca and Gran Canaria for summer 2013.

Jet2.com plans to double its staff at the airport by recruiting 100 employees, including pilots, cabin crew and ground staff, and promises additional routes next year that will take its capacity at East Midlands to more than half a million passengers a year.

The carrier began flying from the airport two years ago, launching eight routes. It will base an additional Boeing 737 at the airport next summer.

Jet2.com chief commercial officer Steve Heapy said: “We opened from East Midlands a couple of years ago with core routes and the services are popular. There is big demand in the region.”

The carrier already operates from East Midlands to Spain, the Canary Islands, Portugal and the Eastern Mediterranean.

Heapy added: “The closure of bmibaby was not a massive surprise to people. There had been a lot of speculation.”

He described sales overall this summer as “encouraging”, saying: “Bookings are pretty much in line with expectations, but it will be a challenging year.

Jet2.com has increased capacity overall by 10% year on year for the summer. This week it also announced a new winter destination, with flights to start from December 15 to ski resort Grenoble form Leeds Bradford Airport. Weekly flights will run until April 13.The move takes the number of ski destinations out of Leeds Bradford to four.

Monarch announced plans to open a new base at East Midlands and expand services from Birmingham on Friday after BA confirmed many Bmibaby services from the airport will cease from June 11 and the airline be grounded from September 10.

BA parent company IAG bought BMI and its subsidiaries Bmibaby and BMI Regional from Lufthansa in April. It began a consultation with staff and unions about redundancies last week.