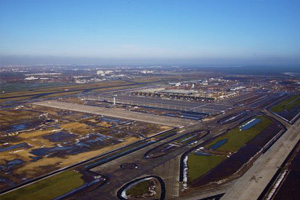 The opening of the new Berlin Brandenburg Airport has been put back to March next year in what is a major embarrassment to the authorities.

The new Berlin airport had been set to open on June 3 until an unspecified delay was announced earlier this month amid concerns about safety.

Airlines had been due to cease flying to the German capital’s existing airports, Tegel and Schönefeld, on the same day.

The Berlin Brandenburg Airport supervisory board announced the extended delay on Thursday along with the departure of the airport’s managing director of operations and the consortium responsible for project managing and supervising the construction site.

The airport will not now open until March 17 2013, a week after Berlin’s annual travel trade show ITB.

The initial delay followed a realisation that safety systems would not be completed in time. A plan to speed up the work and open after the summer was then vetoed by building standards authorities.

In a statement, the supervisory board said: “The risks to timely opening posed by late completion of the fire safety and control system had been underestimated … Some construction works were behind schedule. Interruptions to trial runs occurred repeatedly as a result of construction work.”

It also reported “a lack of reliability of certain systems, particularly in parts of the data technology and safety equipment, specifically WLAN networks, fire alarm system and door controls”.

Departing operations managing director Manfred Koertgen had headed the planning team since 2004. Berlin Brandenburg is sited next to Schönefeld on the outskirts of former East Berlin.

British Airways and Lufthansa are among the airlines operating to Tegel in former West Berlin. EasyJet, Ryanair and Air Berlin fly from Schönefeld.