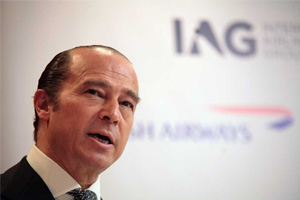 There is a real risk that the EU Emissions Trading Scheme could unleash a trade war, the chairman of International Airlines Group warned.

Speaking at the AGM of the British Airways and Iberia holding company yesterday, Antonio Vazquez said environmental issues were one of the more serious challenges facing the airline industry in the medium to long term.

“Our concerns relate to the countries not in the European Union which are threatening to take retaliatory action in protest against this scheme,” he said.

“With Europe’s economy under severe strain, such measures would surely put thousands of jobs and hundreds of thousands of euros in vital earnings in jeopardy.”

Vazquez called for a global solution to be found through a scheme that can count on the support of all the regions of the world.

“The most effective way of achieving this is through the International Civil Aviation Organisation (ICAO), an agency of the United Nations,” he said. “Governments now have the opportunity of forging a multilateral agreement that will be effective at controlling the emissions generated by the aviation industry.”

He added: “In fact, IAG has led the way in advocating a system which limits and reduces carbon emissions. We firmly believe that emissions trading is the most effective mechanism for lowering carbon levels generated by the industry.”

Concerns over emissions trading compound other headwinds, such as the consistently high price of oil and global economic woes.

“The claim that the airline industry faces one of the most challenging periods in it’s history, it is almost a truism,” said Vazquez.

“In 2007, our sector had barely begun to recover from the impact of the 9/11 attacks and the high price of fuel oil when the financial crisis struck. We are now in the fifth year of a significant economic slowdown and forecasts for the short term remain pessimistic.

“Expectations of a deterioration in the economic situation in Europe have resulted in subdued demand for air travel. As the crisis in the euro zone deepens, Iata forecasts that European airlines will post losses this year of $1.1 billion, almost double the amount predicted in March.”

He described IAG’s goals as “ambitious but realistic,” adding: “It is clear to us that the process of consolidation is not just about acquisitions and mergers. It is also about having partners that add value to the group, enabling us to confront the new realities facing the industry from a position of leadership in our strategic markets.

“The merger between Iberia and British Airways was the first step, followed up recently by our first acquisition when we incorporated BMI. This will allow us to expand at Heathrow and open up new long-haul routes to the key trading markets.”