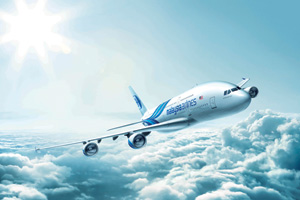 Malaysia Airlines marked the 38th anniversary of its first flight to London by flying its first Airbus A380 into Heathrow on Sunday, a year ahead of the aircraft going into operation with any UK carrier.

The A380 flew back to Kuala Lumpur on Monday with 478 passengers on the first of three services a week, ahead of the carrier switching one of its two daily Heathrow flights to the A380 from August when it brings a second superjumbo into service.

Malaysia Airlines Group chief executive Ahmad Jauhari Yahya said: “This is a beautiful aircraft with a level of comfort way different to our old Boeing 747s. It will deliver new standards of service. It was imperative the aircraft was inaugurated on the London route.”

Malaysia Airlines has ambitious plans for Heathrow, which Ahmad Jauhari describes as “one of our thickest routes”.

That is ambitious in the current climate, amid deepening concerns about the UK and eurozone economies and with high rates of Air Passenger Duty on flights to Kuala Lumpur and beyond.

Yet the carrier “could move to a double-daily A380 from London by next year”, said Ahmad Jauhari, although he conceded: “We’ll have to monitor the traffic. We will review the numbers, but people are travelling despite the GDP issue and APD.”

He predicts that 40%-50% of passengers to Kuala Lumpur will fly on to other destinations, saying: “We have an extensive network covering southeast Asia, India, major cities in China, Australia and New Zealand.”

Malaysia plans to operate the A380 to Sydney, Tokyo Narita and Beijing as it takes delivery of more aircraft, giving UK passengers the chance to fly all the way on the aircraft. The A380 should be on the Sydney route “by the end of this year or early next”.

Malaysia has configured the aircraft with 494 seats: 420 in economy (70 on the upper deck), 66 flat business-class seats and eight first-class suites.

The carrier describes the first-class seats as “the widest in the sky” and has introduced a pre-ordering chef-on-call service for business and first-class passengers to select their own dishes.

Ahmad Jauhari said the number of suites could expand. “We are bit short on first class. The decision was made three years ago and it’s too late to do a refit. We will review it in three years,” he said.

The carrier had planned to include premium economy seats in the upper deck, but he said: “We decided it was easier to sell business class. We can manage the yield better.”

The carrier will review the decision not to offer WiFi on board. Ahmad Jauhari said: “We looked at the cost of running WiFi. There seems to be demand from business travellers, but it would probably be more useful on our regional network first.”

Malaysia will have a second A380 on display at the Farnborough Air Show next week and will take delivery of a further four this year and next.

Ahmad Jauhari dismissed concerns about the wing cracks that older A380s have developed, saying: “We are comfortable with the issue. We’ll have a fix in place.”